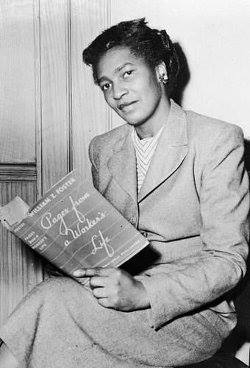 CLAUDIA JONES founder of the Notting Hill Carnival was born in Trinidad. She moved to the United States with her family when she was eight years old.

In early adulthood Claudia Jones joined the Young Communist League in the US, eventually becoming its Director and editor of its national newspaper.

Imprisioned several times for her political activism Claudia Jones was deported from the US to the United Kingdom in 1955 rather than her home country of Trinidad where it was feared that she would stirred people up.

Claudia Jones continued her political agitation in the UK where she worked with other activists of African descent including Amy Ashwood Garvey. She founded the West Indian Gazette, the first black weekly newspaper in the UK, in 1958 and in early 1959 the first "Carnival" was held

Where is Ms Jones today?

To the left of Karl Marx!

Here is what I know (fact)  the Nottinghill Carnival  STARTED IN 1966.. It was discussed by a group of people in All Saints Church in 1965 and then at the Mangrove Restaurant later on. The FIRST  WEST INDIAN STREET CARNIVAL was held in 1966. (not 1959)  There might have been CARNIVAL BALLS and FETES  INDOORS (like at Porchester Hall in Paddington), , before this but the WEST INDIAN (STREET) CARNIVAL  was begun in 1966  I and a friend Leslie Palmer (teacher and trumpet player from T&T) were 2 of the people in on the initial discussions.. My professional musical career began at the same time 1966. Because of performance commitments  I discontinued my involvement in the discussions and organisation...(paddy corea)

This is what I was told and am aware of too Paddy. Where is Ms Jones today?

Bertel: I know that you have a sense of humour. So: Where is Ms Jones today?

Ajamu just told you: TO THE LEFT OF KARL MARX!

Most of the CARNIVALS have dueling histories even though the developments are relatively new. The PAN is a good example -- so recent and so many conflicting accounts.

Claude, I was almost tempted to ask Ajamu if he really meant to the left of Karl Marx, or with Karl Marx when he left :)

It is possible Ms Jones organized carnival parties indoors in various places. POSSIBLE. (like the one I went to in Porchester Hall in 62 with DIXILAND Steel band visiting.) Thats where I cemented my friendship with Theo Stevens (a pan legend from Sthrn All Stars (I think) and of ANNA fame. We both sat in with Dixiland that night. (Curtis Pierre, Miguel Baradas Lenox Acosta and others (hope I have all the players names right memory aint good)  Thats also the year the FIRST COMPLETE STEELBAND was built in England. (complete and built by me music arranged by me and recording contract (EMI) acquired by me  and Ms Jennifer Cross)  Maestros Steelband of Highwycombe,  that band eventually became Highwycombe All Stars. Their 3rd generation players did Buckingham Palace last year for the Queens Jubilee..  by the way Leslie Palmer is alive and  retired in Tobago... paddy corea

The discussion of Claudia Jones (especially the question of where is she now by Bertel) presents an excellent opportunity for me to add another dimension to the comments on WST about the "flawed" Panwomen is Boss All-Female Pan Jazz Concert which I produced at the LaJoya Auditorium on July 28.

The extensive comments were motivated by the Tuesday, August 6, 2013 article by David Cuffy in the Trinidad and Tobago Guardian Online and on posted on WST entitled “Poor production but rich performances at female steelpan jazz concert.”

The concert was just one of several interesting (and maybe xenophobic) episodes I experienced during the seven months (January 4 to August 6) I spent in Trinidad, six of them as a US Fulbright Scholar in residence at the University of Trinidad and Tobago.

As I reflect on these experiences it may be very possible that UTT (specifically the Acting Principal/Provost until July 5th, Dr. Fazal Ali, and to a lesser extent, Dr. Hollis Liverpool, Director of the Academy of Arts Letters, Culture and Public Affairs at UTT) and Pan Trinbago (specifically Bryon Serrette and Keith Diaz) may not have been the only ones who denied me the opportunity to present my ideas.

I arrived in Trinidad on January 4th to begin my residency at UTT. Within two weeks of my arrival I became incensed by two incidents reported in the newspapers: the UWI Fete and the funeral of my colleague, Dr. Tony Martin.

I tried to get two articles in which I expressed my displeasure published, first via Sandra Blood, feature writer for the Guardian, and then with Jeff Hackett, editor of the Mirror (we had a two hour meeting!) The first one was entitled “UWI’s ‘Eat ah Food’ Fete” and the next “Claudia Jones: A ‘Trini’ Sister to the ‘Left of Karl Marx’”. To my knowledge, neither was published.

I subsequently developed a web site, www.panatlantanetworks.com in which I posted the two articles under the “ISSUES” tab. [Maybe WST may post them.]

The piece on UWI's fete is even more important today, given the escalation of the unrest in Egypt and the civil war in Syria where there may have been the use of chemical weapons against civilians.

I still say that the Chairman of the Fete Committe, Dennis Ramdeen and top UWI administrators, the Pro Vice Chancellor, Professor Clement Sankat, and Ronald Harford, Chairman of the UWI Development and Endowment Fund should be asked to resign from their positions for their insensitivity and the myopic worldview they demonstrated by focusing on the Middle East for the UWI Fete.

And there is more! The story about my interaction with the leadership of "my band", Harmonites (specifically Captain, Shelford Lawrence, and Manager, Owen Serrette), is intriguing and really sad. But everything in its appropriate time.

Ok Ajamu, Thanks for the History. According to the article she was buried to the left of Karl Marx, it also describes her association with the West Indian Carnival. Very Good! Thanks again. You were saying something about the Boss Women of Jazz?????

I always try to point out that Claudia Jones did not start Notting Hill Carnival. Claudia Jones started carnival shows after the 1958 riots. Claudia Jones did some of great significance that is always mentioned as an after thought and, that is founding one of the first black newspapers in Britain. I believe historians should give her acolade for this instead of perpetuating that she started Notting Hill Carnival. Notting Hill carnival, now in its 48th year must give credence to two individuals and that is Russell Henderson who played the first steelpan on the streets of London an embryo that took eight years before its navel string got burried into ladbroke Grove when Leslie Palmer presented the template for what we now know as Notting Hill Carnival today. 1973 Remembered celebrated 40 yrs of Notting Hill Carnival as we know it today and Leslie's 70th birthday. While this may create healthy debate, history should be just that-the facts and not altered to suit certain purposes.