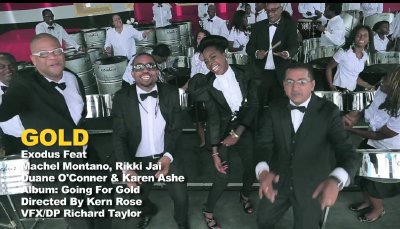 Trinidad and Tobago - PART PROCEEDS from sales of, the “Going For Gold” album will go to an investment fund for development of the music industry. Planning Minister Dr Bhoe Tewarie made the announcement during Thursday evening’s “Going For Gold” album and documentary launch at the Central Bank Auditorium, Independence Square, Port-of-Spain.

“We (launched) this album because we see it as the beginning of two things: (1) the creation of an Investment Fund that would support music and the music industry in this country; and (2) opening the door to further collaborations and other opportunities within the international creative sector, specifically music, which it might not have been possible to do before (we) embarked on the “Going For Gold” project,” Tewarie stated.

The 14-song album and documentary was originally due to be released on August 29, the day before Trinidad and Tobago celebrated its 50th Anniversary of Independence. However actual production of some songs with international collaborators and the finalisation of legal/rights agreements for them, led to the three-month delay. Tewarie acknowledged this at the launch, telling Newsday the new release date — tentatively set for the first week of December, “was worth it because we now have at least two songs that I’m sure will cross very musical barrier in the world.” He was referring to collaborations with US-based music stars, Pitbull and Chaka Khan. Meanwhile, soca star Machel Montano; the Planning Ministry’s collaborator on the “Going For Gold” project, said he worked with more than 150 persons to make the album and the seven music videos produced so far, a reality.

Permalink Reply by Cecil hinkson on December 1, 2012 at 10:35am
I hope Mr Goddard have better luck this time around going for GOLD.