From Jomo Wahtuse:
It is my pleasure to share with you and the entire steel band fraternity my joy of the news that the "Jomoline" in now inducted into the Guinness World Record Books. This Steelpan Instrument which I invented thirty-four (34) years ago, was launched on the occasion of the Anglican Synod at The Holy Trinity Cathedral, Port of Spain, Trinidad West Indies, on May 6th 1977.

My thanks is extended to the many tuners and tradesmen, such as: Welders, and Sheet Metal Workers, who were involved in the development of the "Jomoline" which started in 1966.

However, "The Jomoline," which was launched at the Trinity Cathedral and presented for the Guinness Book of World Records, was tuned by Mr. Vernon "Birdie" Mannette (deceased) to whom I am grateful for his support and dedication in the making of this instrument. And also to Mr. Agustus Antoine, who was the main Welder / Fabricator / Sheet Metal Worker involved in the construction of this instrument. 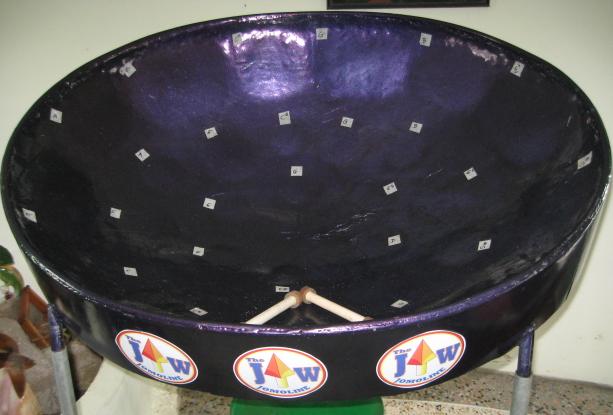 I am proud to say I was one of the invited guests when the official measurements etc for Guinness were done.........

Congrats JOMO!!! Recognition after so long!!!!

Well then, tell us about the pan, specifically its dimensions [diameter, depth, skirt length, etc].

The Dimensions are here:

Permalink Reply by Sweet Eustace on April 12, 2011 at 11:30am
well even though I knew all along I left room for memory errors now that the dimensions are posted I have to say that the world is still flat I have seen bigger and Ian it sounds like a pan and look for a pan tuner named Roberts in your area if he is still alive he has a pan more than four feet in diameter and it too sounds like a pan, Elvis may also still be alive as well, currently there is a bigger pan as a matter of fact pans in St james i will try to get the info soon

Permalink Reply by Ian Franklin on March 28, 2011 at 9:44pm
Kudos to anyone who chooses to be innovative.  I would have love to hear the tone.  Can someone inform us about the tone.

German pantuner Eckhard Schulz made two (2) pans for a fountaine-sculpture in Norway, measuring 115cm in diameter.

Welldone Guiness, for not bothering to do a simple Google search!!