As the United States begins “Black History Month”, African-Americans need to be informed of a part of their “history”, which continues to be omitted from the celebration. Granted, the steel drum (steelpan or pan) is not “American”, however, like jazz, the steelbands and their instrument –pan– is the contribution of the African Diaspora.

The fact remains, that without the contributions of “Trinbagonians” and other great men and women (“heroes” and “sheroes”) of the Caribbean, “black history” in the US, will be filled with voids and not as potent as it is today. Without the leadership and teachings of Marcus Garvey, there would have been no Black Nationalism movement in the United States; a “movement” that created African-American leaders like Malcolm X and Martin Luther King, Jr.

Trinidad and Tobago nationals have also influenced US “Black History”. Kwame Ture (Stokely Carmichael) was the leader of the Student Nonviolent Coordinating Committee (SNCC), and later the “Honorary Prime Minister” of the Black Panther Party. He is considered one of the great thinkers of the 20th century. That century, would see, not only the birth of an iconic world figure from Trinidad, but also the “birth” of an instrument. An instrument “born” from the “womb” of a stolen and enslaved African people; the AFRO-TRINBAGONIAN!

The steel drum is unlike any other music instrument that has ever been created in the Western world. Outside of the “Motherland” (Alkebulan/Africa), there is probably no other place on planet earth, where one would find a music instrument that was “invented” by Black/African people, during the last century. In reality, the steel drum (steelpan or pan) IS “Black History”. Today, the steelbands in Trinidad and Tobago are still predominantly “Black”, however, in contrast, the number of Americans that embrace both culture and instrument (steelband and pan), continue to be (predominantly) White.

Until we are able to effectively connect “steelband and pan culture” to what African-Americans consider as being “Black History”, the amazing story of an equally-amazing inventive “Black people” and their “steelband and pan culture” will not attract the African-American community. Neither steelbands nor “pan”, would appeal to them. Further, because mostly White-Americans play the instrument in the United States, African-Americans will eventually associate the instrument with White-American “culture”, if they haven’t already done so.

Those of African descent, who are members of the steelband community in the United States, have a responsibility to reach out to our African-American brothers and sisters, as much as we have to White America. We have been gracious and accommodating to everyone but those who look like us – Blacks in America. I would like to see the day, when the steelband and pan, become a part of the Black community in the United States, like it is in Trinidad and Tobago. I embrace ALL Americans (and other foreigners, Black, White, and “in-between”) who embrace me and my culture, however, it disappoints me, that our Black American family, remain on the outskirts of our steelband village. Again, STEELBAND and PAN are BLACK HISTORY! I close with my own coined phrase:

As always, Shem Em Hotep, and may you walk in the Ma’at Principles. 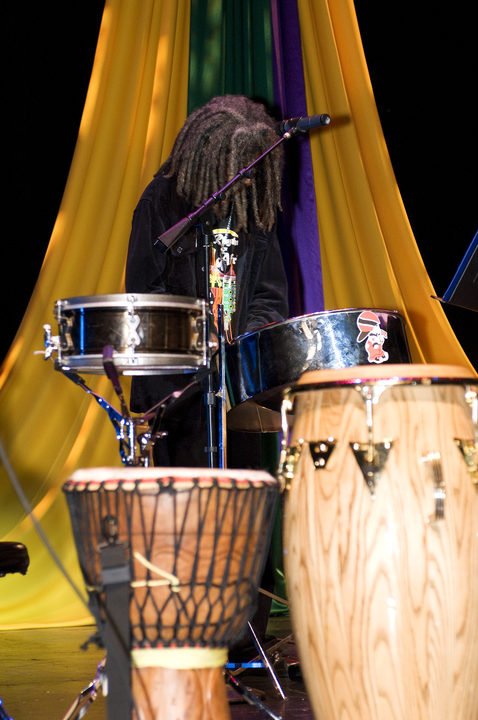 Why the drum is silent George?

Permalink Reply by jerome ebenezer clarke on February 2, 2014 at 3:16pm

Cecil !  I do presume that the silence of the drum is due to suffering endured by our forefathers/Slavery and  they could not have spoken  because of the WHIP.

Ghost, I was born in Belmont and seeing the many steelbands in that community was so great, Black people did the best, all filled with their supporters during the panorama season and today I believe its totally dead. Here in the USA you see so many well organized pan programs, in the best universities, students having  state of the art facilities, rooms to practice, pans, music from best Trinidad arrangers home and abroad. They have a way is storing their pans etc. young students, all can read music and some are now developing to play by ear, saddens my to why Trinidad let this  run away to foreign. At home pan still hustling to make a dollar. Its sad. Also you can easily get shot at practice. Less than three weeks ago a gunman in broad daylight start shooting in All Stars pan yard whilst people were practicing their 2014 contribution. Backwardness. This needs to stop.

Patrick, You knew "Goat" deceased, he was for Belmont and used to live in DC, he had a Band in DC some years ago. Did you know any of the fellas that used to lime by an Indian parlor @ the Circular? (it's been so long can't remember the name of the Indian people)

I go way back, I lived Erthig rd. Seemungal Indian shop sell variety of carnival materials, What part if Circular near valley rd. The BATA store had a indian man who sang a lot. There was another indian who had a parlor on Erthig rd. can't remember his name. Was best place to live in the world years ago. Norvell bakery was the best.

Permalink Reply by jerome ebenezer clarke on February 2, 2014 at 2:54pm

Permalink Reply by Andre-Roger Dellevi on February 2, 2014 at 3:19pm
'Nuff Respect and long live Alkebulan and its ancestors far and wide...

Permalink Reply by jerome ebenezer clarke on February 2, 2014 at 4:01pm

Luckly yesterday I took the opportunity to read  on the MSN news the History of Black History month  coupled with the American Indians merging presumably  in the struggle,,it was quite disturbing and had brought only???? after going indepth into most of the facts stated relative to the injustice meted out during the days of slavery,fighting for ones rights ,discriminated,,murdered,,burned,,shot , assassinated.,just sickening.,,well Massa Days  Done and Gone.,my statement has no biasness herein,

Habari Gani George D, How gracious of you to highlight the need for us to take pan to our African-American brothers and sisters!  Your point has stirred my interest so I will ask the few African-American pannists as well as one university professor about their apparent lack of interest or involvement in pan. Some effort was made at a Central Florida HBU years ago but the program ended abruptly.  I am unaware of programs at predominantly Black elementary, middle or high schools anywhere in the USA. Whether intentional or not, it is my view that pan is being 'white-washed" in America.  That is, there is a disconnect between the instrument and .its unique African cultural evolutionary experience.  In 10 or 20 years from now, when others tell their history of pan, its true identity may be unrecognizable.  It is imperative therefore, for those who care and assume the responsibility of telling the truth of the instrument's history, bring those connections to the African American communities.