Prime Minister Dr. the Honourable Keith Rowley made the announcement last night during a visit to the band at their current panyard.

The new Pan Theatre will be located in the environs of George and Nelson Street in Port-of-Spain and fits into the Government’s plan to redevelop the City of Port of Spain by providing entertainment and exposure of the country’s culture to citizens and tourists alike.

The project will take an estimated six months to complete and it is hoped that by Christmas, the steel orchestra will move into their new home.

Listen to Dr Rowley’s full announcement to the band at their practice session yesterday (February 20) as they continue preparations for the Panorama Finals on Saturday. 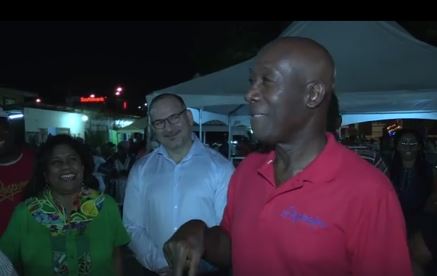 Mercer Ramdoo: I just want YOU ALONE to read this old article from 2015 ... you know that YOU and ME understand CERTAIN THINGS that the rest of the POSTERS on THIS FORUM don't UNDERSTAND!!!

You are doing job.

I am very glad 4 this.But why it is d Gov't that always have 2 bail out everybody.What happen 2 their sponsors. What is d band's input? It would b difficult 4 them 2 refuse 2 help another steelband in need in d future.I fed up with people in this country who believe d gov't should do everything 4 them & they just sit back.Ah glad 4 Despers but sad that we as people doh want 2 come out of this dependency syndrome & do things 4 ourselves no matter how hard it is.What r d bands who did not make d finals doing now,Those whose competitions have finished,what r they doing now.Waiting 4 nxt Panorama?.What r their managements doing? What will happen the rest of d year?

Sherman: This is 2020 GIMME GIMME SEASON!!! All these questions you are asking have ZERO RELEVANCE to the REALITY OF THE STEELBAND CULTURE and PAN LOVERS.

I don't think that you have been following the PRONOUNCEMENTS of  THE PRESIDENT OF PAN TRINBAGO when she boasted that PAN NO LONGER HAVE A SEASON (PAN IS AN ALL YEAR THING NOW) and EVERY PAN YARD has been turned into a CENTER OF EXCELLENCE bringing SOCIAL TRANSFORMATION  and CRIME REDUCTION to the MECCA OF THE STEELBAND.

And there is now PROSPERITY IN PAN and TOTAL TRANSPARENCY IN PAN TRINBAGO!!!

Claude,when I was growing up in St James,pan was a yr round thing. D panyard was d focal point 4 all d yths.It was d place 2 lime,roast breadfruit,huff somebody chicken that strayed & cook it,also gamble or just play cards.My uncle Rudolph,also called " Tiger" was a  FOUNDING  member of Crossfire,he ,Eman Thorpe,Sterling Betancourt, Ruben Sammy & a few others in d area started d band.i saw this afar off,cause I couldn't go in d pan yard.U could get a trim in d pan yard. Almost every steelband had a football side,one or 2 also played cricket,especially windball cricket.D older heads who ran d bands at that time ,although most of them were so-called "bad Johns" had a love 4 d artform.D players played 4 d love also.Tours & money came in & everything started 2 change.Pan people wouldn't allow non pan people who had management & organisational skills that they don't have 2 play a part in d movement 4 d most part, so many bands fell by d wayside,& continue to fall.Cruise ships should b coming here 4 carnival. Bands should b advertising on cruise lines,"come,play with an authentic T T steelband 4 carnival".Bands who have sponsors should b handling some of d sponsors advertising,like jingles & other promotions.Bands should b selling ad space on their pan yard wall inside & outside. A few do. Most don't.How many bands have an annual concert? A few have annual events that patrons look forward 2 every yr.Carols & Classics on Steel died,d bienniel music festival ,died,d schools bienniel music festival,died,Pan In D 21st Century,died. Every steelband used 2 have a stage side,playing yr round especially at events in their community. Most bands have alienated d people in their  community. They depend on pan mercenaries 4 Panorama.Weekend Bar B qs should replace d Blockos we used 2 have or we could try 2 resurrect d blockos,Everybody sitting back waiting 4 d nxt hand out.Run paid pan classes 4 newcomers. I make my living teaching pan.I help some in between but almost everybody that come by me pays.Despers just won a million dollars. I don't know what taxes if any they have 2 pay.But they should end up after expenses with a couple hundred thousand dollars.They have a sponsor who,I would think took care of most of the pre-carnival expenses,so d band should b able 2 bank some money & c how it could help itself.Some yrs ago All Stars bought a truck,which means they don't have to hire a truck 4 their stageside during d yr. I blieve d truck also does jobs 4 other people ,thus generating more income 4 d band, This is what we need more of.there is still much 2 say but here I rest my case.

"Pan people wouldn't allow nonpan people who had management & organizational skills that they don't have 2 play a part in d movement 4 d most part, so many bands fell by d wayside,& continue to fall."

Thank you Sherman, nothing like having a LIVING experience that gives knowledge and power from which one speaks. The time has come for us to REVISIT what we have taken for GRANTED...

How do we COLLABORATE, to find the best SOLUTIONS???

Back to school in pan *