OUR INSTRUMENTS OUR MUSIC

I don't know of another country that has their own family of instruments, how come none of our top performers never use a steelband to accompany their music? not even those that compose songs for the steelband, maybe our big brake will come when we learn to fuse the both of them. We could start with every song compose for panorama be accompanied by a steelband.

That will be a good start, "accompanied by a Steelband or Steelpan"

I agree , I have written about this before . A lot of musicians out there , Canada and USA to start with , do not have a clue as to how much our instrument can be helpful to them. How do we go about educating them??

I had a discussion with a past president of Pan Trinbago when Colin Lucas won the competition that the following year all pan songs compose for panorama must be recorded with the performer using a steelband to accompany their music.

We love to talk about how we invented the pan and so on but when it comes to really loving our invention I don't think that most of us have that real love. Educating people about the scope of the pan would not be necessary, because  if we really love it we would find ways of incorporating it in all our music. Action speaks louder than words and we do give the pan a lot of lip service.

Good points Sherwin, I think that most of our performers don't think that pan could do the job. People like Boogsie, Ray, Pelham and the rest have to lead the way, show us all what the steelband can do.

The more you think of it the more stupid it seem, you composing a tune for the steelband but you don't use ah steelband to accompany the vocals.

When I talk about educating people about the pan and what it is capable of doing for your musical score , I am thinking of all the big stars out there . People like Beyounce and J.Z as an example . Our music consist of mostly calypso,soca and chutney just to name a few .Most people outside of the West Indies have heard very little regarding our music and most of them relate music from the West Indies as Reggae. For that matter , the minute they find out you are from there, they assume right away you are from Jamaica which drives me crazy. As much as I love Jamaica they do not have a clue about Trinidad and Tobago . Forget asking them about steel band music.

So ---- again ---- how do you go about educating people about our instruments capabilities??

Emile, we have to educate our own people before we think about others, this is why it is necessary to fuse our instruments with the songs we make, get our peoples ear accustom to hearing that sound. If we create a new sound we won't have any problems spreading it across the Globe  with todays technology.

Well, according to a colleague of mine, the leader of one of Trinidad and Tobago's most-successful soca bands, clearly stated that he "didn't want the stigma attached to the steelbands (sic)...". BTW - There are numerous countries that have their "own family of instruments"; countries on the African continent, and places like Brazil come to mind. In reality, they also have their "own music", for unlike conforming to the 12 "notes" of "Western" (European) music and its rules on harmony and composition, they follow their own set of "rules". (Maybe, we should make a pan with a whole new set of notes. Just kidding.)

The bottom line is pan and the steelband has not been effectively marketed, and part of the reason (unfortunately) has to do with our race and class issues in our post-Colonial, society. Failure to accept and deal with societal negative perceptions of the steelband, has been detrimental to the latter's acceptance in every level of society, including the "Arts". I see people commenting on the "Pan Is Beautiful...", but not many understand the historic significance, as to what led to the steelband's association organizing steelbands' first independent music festival. They knew they were “beautiful”; they sought to become POWERFUL! And, they did. I am not sure how asserting one's beauty benefits one who already knows that they are (beautiful). Reminds me of the old Queen of Sheba apology to the “daughters of Israel”, asserting that (although) she was “black”, she was “comely”. (As if being “black” predisposed her to being “uncomely”. “Comely”, by the way, essentially meant “beautiful”.

I think too much time is spent on begging to be liked, and not enough time on becoming likable. There is a BIG difference. You cannot force someone to like you, your culture, nor your music, regardless of how great you may believe it is. What you can do, is show people how much you love it, and how much satisfaction you get from being a part of it. Hopefully, then, the loving, cool, vibes become infectious, and people from all different backgrounds, start following you, and joining you in embracing whatever you claim to be yours. (It isn't, by the way.) You become as competent on your instrument as you possibly can, and you learn to entertain, not just play music. That’s what Othello Molineaux did, and why he and Jaco became inseparable. That’s why he is on Chicago’s album. That’s what Robert Greenidge did. That is why he is favorite any and every where he plays. That’s why Jimmy Buffet picked him up, and why he was able to impress Ralph MacDonald. That’s what Hugh Borde did. That is why his band could impress people like Aretha Franklin and Liberace. That’s how he would end up on the David Frost Show. And, by the way, that’s also what Bob Marley did. People got “educated” about his music and culture, by listening to the lyrics (word), distinct beat (sound), and the “spirit” of Bob’s heart (power).

We have gotten so “Western” in our thought-processes, that we MUST quantify EVERTHING! Including entities that are intangible, for example: sound. No one can “educate” anyone to like a particular timbre that comes from any instrument. For some, there is NOTHING like the sound of a saxophone. For others, it may be an acoustic guitar, or a vibraphone, or, an African Talking drum. Some may like a combination of various instruments, but that will be based on their own aestheticism, and not on some “educated” narrowing-down of choices. I am yet to meet a person, from the most-delinquent young, urban thug, to the most-conservative, older, dweller of suburbia, who did not like the sound of the steelpan. We need to stop blaming others (i.e. those who do not embrace “our instrument”) for our own short-comings, and end the hypothetic arguments regarding whether or not pan would have been (or would be) better off in the hands of non-Trinbagonians. After, the wind blows and the air clears, a solution will still be needed. Again, I suggest the “Blueprint” as a point of reference.

Reminds me of a story: A young man, on his way to work every morning, had to walk pass a small, local zoo. Every morning, as he passed the zoo, he would see a gorilla in a cage, literally bawling its eyes out. This happened for weeks, until one day, he decided to stop and ask the zookeeper, “Why is the gorilla always crying? I see him every morning when I pass by.” To that, the keeper replied, “Oh, that’s because he has a thorn stuck in his thumb.” As he attempted to walk away, the young man asked, “Then why doesn’t he simply pull it out?” Looking back, the old zookeeper answered, “Oh, because it only hurts him enough to cry about it.” 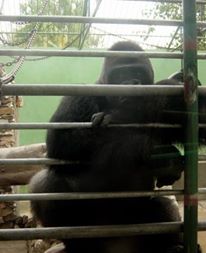 When we learn to stop crying, and do something about “it”, whatever “it” is that is causing the crying, then we would have matured into the industry that we were meant to be. Until that time, we will continue to have a lot to cry and complain about, ad nausea. The “education” that we propose on bestowing on those we think need it, is really better served by our commitment to our own “education”. That “education”, as it relates to the steelbands and the steel drum/pan, must be clearly defined, and it MUST be factual. Internationally, I see some things that I like, and our brothers and sisters around the world, are making significant progress that will positively affect the history of the steelbands, steel orchestras, and their instruments of choice. What we need to focus on, is the local industry in Trinidad and Tobago, not as some closed entity, paranoid with possessiveness and rightful ownership. We need to work with our, regional and international colleagues, if we are to put together any meaningful agenda that would bring us closer to the day when we see and hear steelbands, steel orchestras, and steel drum/pan soloists being international names like Othello Molineaux, Robert Greenidge, and Hugh Borde. Let the crying end, and the hyper-marketing begin!

Pan’Tum. The Ghost Who Talks. Honoring The Legacy Of George “Sonny” Goddard.

There is nothing more to be said, is there?

One small point. I did not think we were doing too badly with spreading of the knowledge of the instrument and its capabilities (although it is some time since Terror wrote 'Pan Talent' where he sang in praise of the spread of pan) But when I hear these pannist playing all types of music all over the world, when I hear pansides springing up in all far corners of the globe, when I hear of pan being introduced to China, when I heard on When Steel Talks that Australian Police steelbnd at their tattoo, And then Liam Teague and that Latin American orchestra rendering 'Tico Tico' and later his rendition of the famous guitar solo which made my hair stand on end. I have to ask, is not all of the thorns in our fingers those that are based in Trinidad?

So maybe you need to keep talking!

The dialog must continue until the men of ACTION step forward.

AMEN. I am yet to find anyone, including musicians who do not like the timbre of the steel pan.  Moreover, pan seems to be proliferating in high schools, colleges and  universities here in the United States.

Trinidadians, you have an important example to share to the rest of the world, especially the USA. You converted gang warfare to musical competition that has become the centerpiece of the largest annual festival and celebration in the Caribbean. EMBRACE THIS HISTORY rather than run from it. Think of how this can serve as a model for solving similar problems elsewhere.

Gordon, It looks like Trinidadians don't know what to do with it.