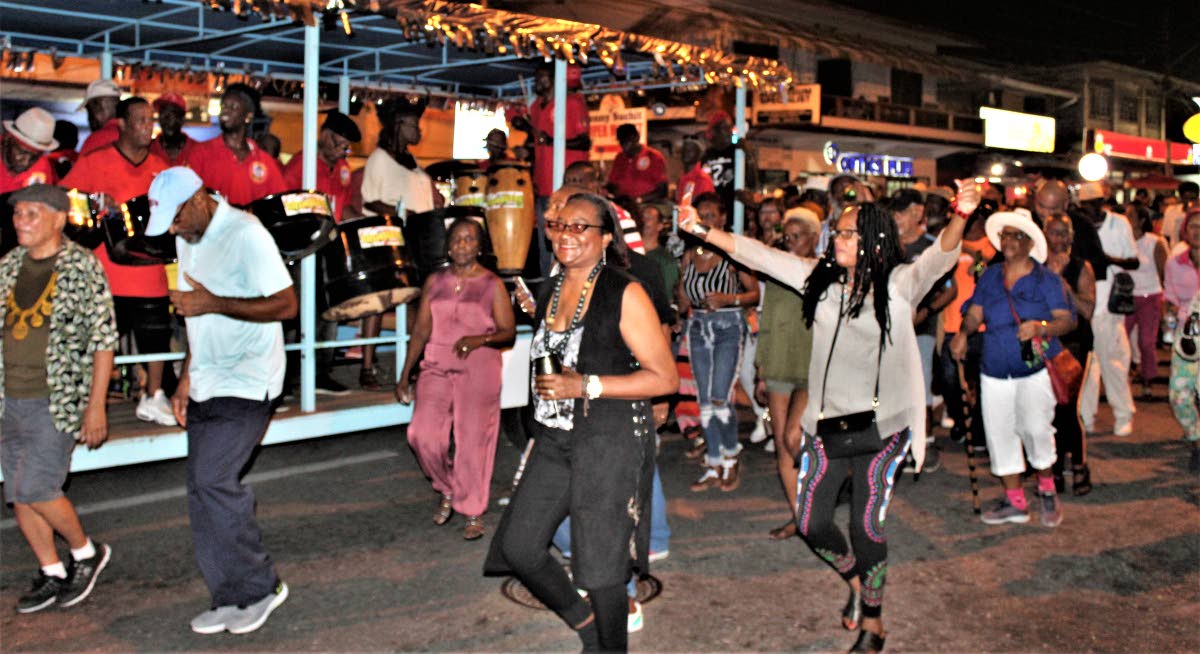 Dancing to the sweet music of Brimblers.

LAST Saturday’s We Beat Pan Parade proved smaller than expected, with large bands like BPTT Renegades, Massy Trinidad All Stars, Hardo Phase II, Shell Invaders, Desperadoes noticeably absent. Some of them were booked for an event in Arima on the same evening.

This was the 19th edition of the parade and despite the poor turnout of bands, president of Pan Trinbago Beverley Ramsey-Moore and several members of the executive were present at the St James Amphitheatre, where the bands played before moving along the parade route. Patrons too made the most of the evening as they chipped behind the steel orchestras, which included Brimblers, Harvard Harps, Old Tech, Power Stars, MHTL Starlift, and Woodbrook Playboys.

I hope the people that said it is OK to have two steelband events on the same day are happy. This is what they do in happy land.

How about the people who say that you could have PANORAMA from OCTOBER TO MARCH?

And how about the people who say that 10,000 WHITE TOURISTS will be coming to TOBAGO for the MEDIUM BAND FINALS and 200,000 PEOPLE will be BUYING THE PAY-PER-VIEW WORLDWIDE?

Claude...WeBeat Pan parade has been failing, was bound to fail this year and will continue to fail simply because is only ole people who support it. The few youths involved are only there because they probably getting a lil change to play for a band...The rude awakening is not far off for Panorama either...and for the exact reasons...Trust meh...

I trust yuh, but is only ole ppl who support PAN. There is a plan afoot to get rid of all ole ppl in and around pan.

Cecil Hinkson: There were not two pan events on the same day, as the event of the same day that the big bands were advertised to play at was rescheduled.

Claude Gonzales: Some steelband leaders may have voted in favor of the medium bands finals in Tobago, but panmen on the ground in general are not in favor of that idea, and are wondering why Pan Trinbago does not honor the 2018 remittance debt before investing in a show that they expect the people that they owe, or refuse to pay to ensure its success.

merrytonestothebone: Maybe only "ole people" in the majority are the ones who support pan, but the reality is, that young pan players greatly outnumber the"ole people" who play pan, so in that context I see some continuity, not necessarily expansion, but continuity.

Mercer Ramdoo: The propaganda that, "There is a plan afoot to get rid of all ole ppl in and around pan", maybe as a result of "ole People" in pan not understanding when it is time to, or that the time has come to pass the baton.

Education Ministry And Pan Trinbago To Include Pan In Schools Curriculum

The background to this initiative is the growing irrelevance of pan to the musical culture of young Trinbagonians, which has reached crisis proportions. A thorough 2014 Ministry of Culture study describes pan lovers as “an aging population, many of whom are now middle aged and retirees.” Even those youth who play pan are often motivated mainly by the possibility of earning some money; their friends do not support them and after a few years, once they settle into stable jobs, they leave the Panyard forever. This problem, therefore, is one of succession.

merrytonestothebone could write a WHOLE PAPER on that TOPIC.

Even AQUIL ARRINDELL -- he explain the whole DECAY SYSTEM to me. Once the CHILDREN IN THE PAN YARD reach a CERTAIN AGE ... DEY DONE WITH PAN.

But what allyuh doh realize is that the FIFTIES and SIXTIES was a ONCE IN A CENTURY EXPERIENCE IN MUSICAL EVOLUTION and after that PAN SPRINGBOARD TO GLOBAL!!!

The real CHALLENGE NOW  is for TRINIDAD to link into GLOBAL PAN!!! But with a PRESIDENT like BEVERLEY -- TOBAGO PANORAMA is TOUCHING THE SKY!!!

Russell Providence, they only change it recently after people started talking about it.  Everybody know the real reason for lack of support for WeBeat is they did  not have the funds to hire the big bands.

Passing the baton seems to be something "ole people" just can't relate to. And so their faith is sealed. It so ironic considering the Pan movement was a youth movement.  Maybe those in power need to study the Rap movement.

The Pan in School project will be ex­tend­ed to all pri­ma­ry and sec­ondary schools, Ed­u­ca­tion Min­is­ter An­tho­ny Gar­cia an­nounced yes­ter­day dur­ing his brief ad­dress at the launch of the 44th Na­tion­al Schools Panora­ma 2019 at the Queen’s Park Sa­van­nah in Port-of-Spain. 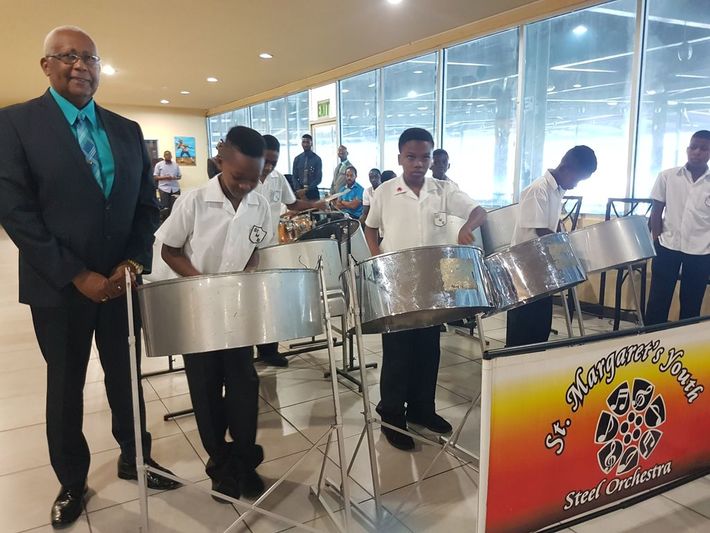 Education Minister, Anthony Garcia stands proudly next to members of the St Margaret's Anglican Boys Primary School, as they played a pan rendition at yesterday's launch of the National Schools Panorama 2019 at the Queen's Park Savannah.

The inhabitants of the Caribbean archipelago comprise a mere fraction of a percent of the world's population. Incredibly, however they have created some of the most fascinating and compelling rhythms including calypso, chutney, mambo, merengue, parang, reggae, salsa, shango, soca, son and zouk.

Born in Trinidad circa 1935 the Steelpan, a definite-pitch acoustic musical instrument of the idiophone class, is rapidly attaining mainstream status four decades later. Simultaneously, the Caribbean Telecommunications Union, Egrem, Caziq and Sanch Electronix Ltd are commemorating important historical milestones and celebrate Pan together for becoming the most significant rhythm of the region.

I don’t like to say much in this forum but some of the bands mentioned in the beginning of this article were never asked to participate in We Beat this year, plain and simple. The 2nd event someone mentioned did not take place last Saturday, it was rescheduled to last Wednesday instead. The wording of the article is unfortunate as it could imply those bands were invited to We Beat and did not show, but that is not the case. There is no bacchanal here, please move on.

Never asked to participate. Very interesting. No money, no Pan.