Seven want to be Pan boss 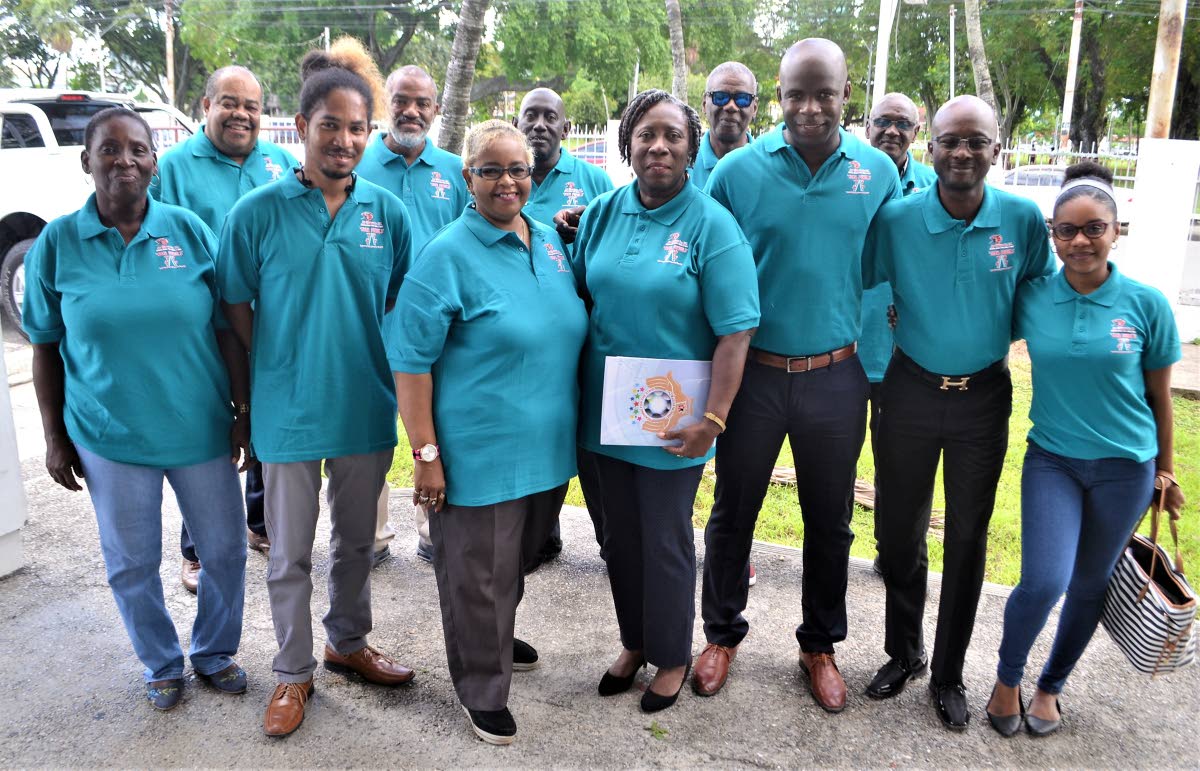 Members of Team Re-Build outside Pan Trinbago’s office on Monday.

Trinidad & Tobago, W.I. - Seven people have filed nomination papers to contest the position of president of Pan Trinbago when elections come up at the end of the month.

They are former Port of Spain mayor Keron Valentine, former THA assemblywoman Beverly Ramsey-Moore, Lawford Duprey, Robert Amar, Keith Byer, Vernon Morancie and current external relations officer (ERO) Darren Sheppard. The post of general secretary will also be hotly contested, with the incumbent Richard Forteau being challenged by former CEO of Postal Services, Robert Hernandez and Denise Hernandez, among others. However, Pan Trinbago president Keith Diaz was upset yesterday, as Forteau and his staff who collected the application forms were not at work to give a full listing of candidates.

Ramsey-Moore too questioned how Forteau could be in charge of collecting nomination papers when he himself is a candidate.

Ramsey-Moore said: “Our team is a mix of youth, women and experience.”

Duprey (Harvard Harps), who is also an independent candidate, said: “I have been involved in steelband for a very long time, and the time has come to refurbish the image of Pan Trinbago. I also think there should be more transparency and accountability that has been lacking in the organisation and if I can help I will.” Michael Dinchong is also among the independent candidates who will be contesting the EO position. Meanwhile when asked about pan players’ remittances for this year’s Panorama, Diaz said the NCC is working on it and as well, he is working hard on getting it done before he leaves office at the end of this month.

OH LORD!!! Ah have meh work CUT OUT FOR ME -- MAKING SURE that BEVERLEY DOH WIN!!!

I don't know Duprey, but I'd definitely go for ROBERT AMAR.

Glenroy: I am expecting AN APPOINTMENT as DIRECTOR OF GLOBAL STEELDRUM MARKETING AND PERFORMANCE if MY CANDIDATE (Keron Valentine) wins.

It is a new concept in PAN TRINBAGO. My salary will be a PERCENTAGE of the REVENUES I bring in!!!

BUT Cecil, I ain't seeing yuh name on d slate?

Bertel Gittens: Ah know that yuh REAL VEX!!! Yuh spend so much years SUPPORTING the NEW VISIONARIES and now they come back in 2018 and DEY LEAVE YOU OUT. Not even the LOWEST POST dey put you up for!!!

Ah feeling REAL BAD FOR YOU.

Look at me!!! I went and get ah BIG WUK as CAMPAIGN MANAGER for KERON VALENTINE -- so I IN THE MIX from the morning of the 29th of OCTOBER when we TAKE OVER THINGS!!!

Claude, I could never figure out what trustees do. Could anyone help me out here.

Hey Claude, my time pass boi, ah leaving things fuh youths like Marcus an Aquill. I do what I had to do already.

Inquiring minds would like to know? Marcus Ash talk to me.

The solution is simple inno....one man one vote! The constitution just needs to be amended. Forget what category and give members the right voice...

Mercer: I thought you BORN AND GROW UP IN TRINIDADA!!! PAN IS a TOTALLY AFRO-CENTRIC TING in TRINIDAD AND TOBAGO.

Yuh think they will PUT AH INDIAN MAN to lead PAN TRINBAGO. If you really believe that then I am going to apply for the position GRAND WIZARD of the KKK with my BLACK SELF.

I cannot make you VICE PRESIDENT of GLOBAL MARKETING OF STEELBAND MUSIC and PERFORMANCE if you DO NOT UNDERSTAND how the RACE THING works down in the MECCA OF PAN!!!