Trinidad All Stars wins Band of the Year 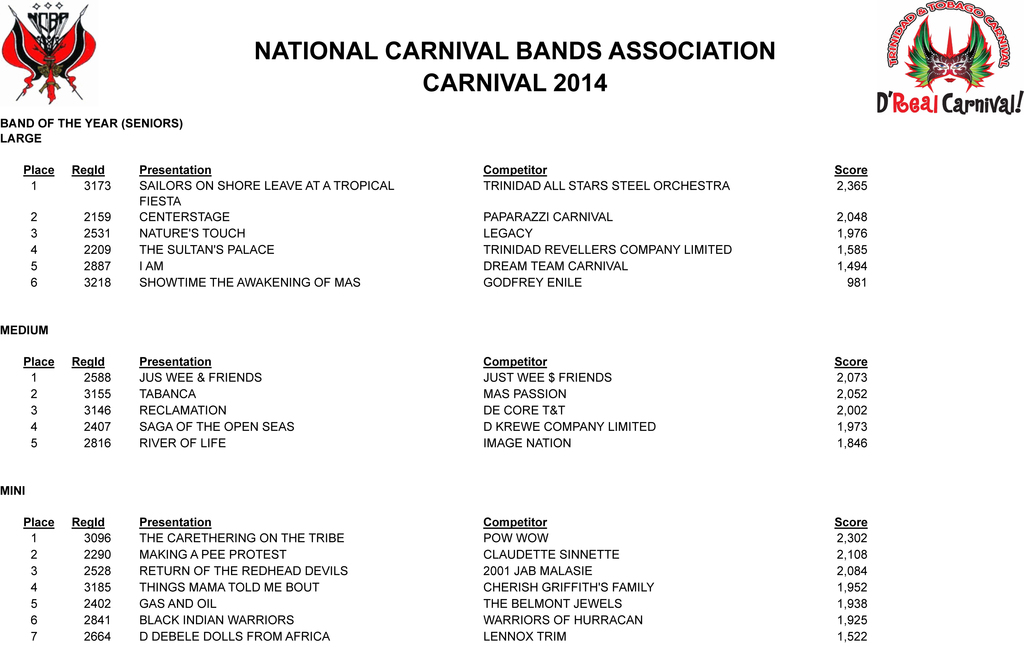 Congrats to Trinidad All Stars

Can some one educate me. Is this Band of the Year as in George Bailey, Macfarlane, Silver Stars, etc,etc.

Thanks Oswald. WOW. This is history man. I and maybe 99.999% never thought that a Steel Orchestra will win another Band of the Year Title. How come the news is so quiet. This info should be blaring on the airwaves (lol). Many of our young in the pan world are not aware of history because of us, the elders.

I do hope that this Steel Orchestra/All Stars victory after 51 years will be etched into the minds of our young in the pan world. In my first pan book, one of my questions is; Name the only Steelband to win the Band of the Year Title. I now have to change the question to: Name the first Steelband, and add another, who is the second (lol)

Thanks again Oswald, I am so happy.

I am an All Stars fan and really felt disappointed when they came second to Phase 11 for a second year.  But now they have made their mark in the history books, I am overjoyed at this achievement coupled with the fact that they got People's Choice too.  Now 2014 Carnival for me has a reversed reaction.

I mentioned this week that the presence of the Steelbands made a difference for me this Carnival.  The music trucks played and over-played MOR, that it was the impression of the tourists that there was just one soca song.  They commented that it was a pity that they limited the exposure of our music to just this one song, to which I agreed.  So here again we are seeing where the Steelband and a Sailor On shore at that, has outshone the bikinis etc. and their music was electrifying.  All we need to do now is firm up the position of steelbands and get them back into our Carnival once more

This is not to take anything away from All Stars win but when ah band win band if the year playing sailor ah have  to wonder, What did I miss?

Cecil, This is History, this is different to when Silver Stars win with Gulliver Travel, the mas belong to someone else, this case the Mas is All Stars mas.

Then again, if All Stars win Band of the year with ah Sailor mas what happened to them Big time Mas? This year mas must be Sh*tty.

Unless they were compensating All Stars because they lose by (1) Point in the Panorama, (I don't  no)

Bede, yuh right! This years Mas was SH*TTY!!! And I know for sure, the powers that be are concerned right now!! Just imagine Ronne and Carro, a Bikini, Beads and Feathers band, is band of the year downtown Port of Spain!!! What d hell it is going on with Mas in T&T!!????? The thing is All Stars play this every year. They should be band of the year every year!!?? RIGHT!!!??

The last paragraph sounds more like the story to me Bede, but let's give them the benefit of the doubt

Bede, how old are you? Way back then most of the steelbands brought their own mas, all over the country, members, supporters and families all banded together to produce these bands, Silver Stars was no exception to this trend. In 1963, which was also the first year of panorama, Silver Stars led by Russell Carter portrayed

'Gulliver's Travel' , won the band of the year title, they were not playing music for any external entity. Sincere congratulations to All Stars, The circle has made a complete turn, this feat should be an incentive for other steelbands to play mas again.

Cecil, Look like we stand ah chance bringing back Pan with Mas on the Road? Don't give up, "What he done for others, He'll do for you".