Emmanuel ‘Jack’ Riley in the Spotlight

You've heard of Len 'Boogsie' Sharpe and Robert Greenidge, two of the best steelpan players on the planet. Now in an exclusive When Steel Talks interview meet Emmanuel “Jack” Riley - the man who influenced them and a generation of top pan players.

Emmanuel Riley, now based in New York, is one of the steelpan instrument's true living legends - he is a Master pan craftsman, tuner, and renowned soloist... Mr. Riley was honored in New York at Lincoln Center on June 20th, 2004 at the Acoustic Revolution Pan Jazz concert for pioneering the art of improvisational jazz playing and contributions to the steelpan art-form... Mr. Riley is one of the best of a special generation of young people who were both great players and master instrument makers.

Hear his experiences, his travels and his stories... Mr. Riley's steelpan feats have already been immortalized in song and the folkways of pan...

Again Big Up WST for honoring a legend while he is still here. Great respect for Emmanuel "Jack" Riley and his continued contribution for the Pan. it would be great to hear some of his prolific playing. Wallace Austin  had spoken highly of him and his playing and intersting story..... Glenroy and Terry ...give us some music

I am checking, Salah, actively checking!! I wish that this steel band, one of T&T's oldest, had CD compilation of their years of wonderful music. I should have: Shell Invaders Steel Orchestra: Harmony in Steel, LP RCA  3021, according to my listed ''stash". But there is more to check. Glen.....HELP!!

....a third album I have is Steelband Classics, Vol.1 features Invader's Beautiful Dreamer on side one track 5.

Here are all the tracks originally posted on YouTube by SuperSnk1. (not very clean but....retro sweetness)

I've head his name mentioned and referenced over the years but nice to put a face to it...  WST strikes a chord again...  Thanks... 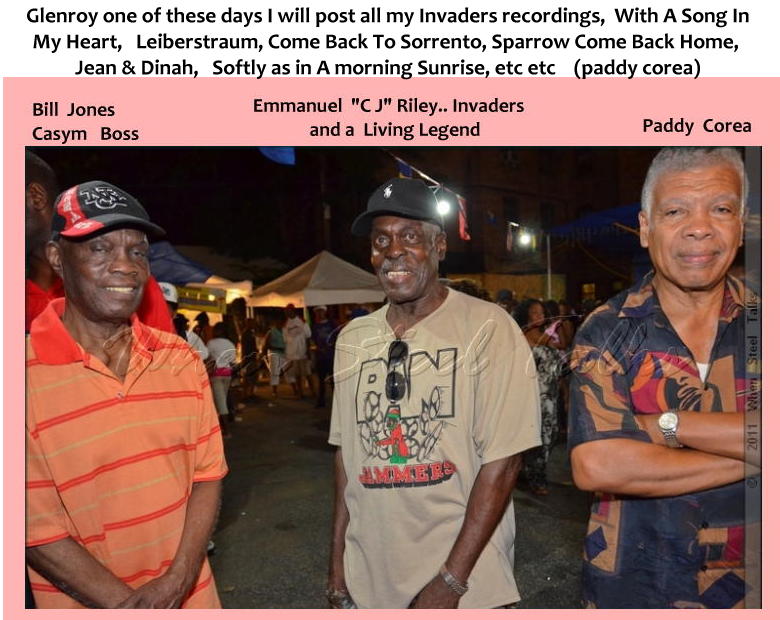 To all members that do not live in New York, you could always catch Jack playing in a band J'ouvert labour day

I grew up on Luis Street in Woodbrook, two blocks from the Invaders yard.  In the mid-fifties, when the great steelband experiment was accelerating from single pans (around the neck) to multiple-pan instruments, one could hear the sweet sound of the "harps" many blocks away, long into the night and all year round.  As a youngster, I was drawn to the music but didn't dare step foot in the "big" yard because of the threat of a good "cut-ass" from my father.  So I did the next best thing.  I asked my father, who knew "Jack" very well from his part-time work at the Queen's Park Oval, to get him to tune a tenor-pan for me.  A few weeks before Christmas 1960, I got my wish when I took $20 to Jack at the Invaders yard for a brand new tenor-pan, just in time for me to start playing with the band for Carnival 1961.  Today, when many soloists offer us weak chromatic scales as improvisations, I would recommend that readers listen to Jack's solo in  "Liebestraume" which was recorded in 1958. His "rev," as we used to call soloing back then, would have made Franz Liszt proud and he set a standard for others to be measured by over the past 54 years.  After “Liebestraume,” you can then listen to “Melody in F” for more of Jack’s soloing.  Of course, everyone in Invaders wanted to play like Jack and his phrasing style had an impact on the unique sound of the band during the late-1950s and early-1960s.  Thanks, Jack!!

Dah Is WoodBrook in dem days.  We WoodBrook. (Give Errol a high five). Did you not play with Solo?

I is 3 houses from Invaders.

People have all the wonderful work of Jack listed here. Sparrow Outcast must be added as one of the best solos EVER!!

His work can be transferred to CD's and sold as  work of the master, of course with income for the man.

Terry, you have priceless material that no money can buy.A friend made me cassettes and converted to CD's. My car is getting "fed up" of the repeats.

Andre-Roger Dellevi: Thanks for posting those tracks I enjoyed them both....memories of the vibrant evolution of Pan music.