Whenever mentioned is made of the great pan soloists and  jazz improvisation masters, none is made of Othello Molineaux? Why is that? Othello's and Monty Alexander's Ivory and Steel, Othello's works with the legendary Jaco Pastorius  and the legendary rock group Chicago, are all trailblazing moments in steelband and steel drum/pan history. ( (See Chicago X, released in 1976. Also, listen to "Another Rainy Day In New York".) I am not sure what "mainstream" is to some, but in 1976, Chicago was the top rock group on radio. That same album, Chicago X, which featured Othello (or "Tello" to his close-nit friends), also had the No. 1 hit "If You Leave Me Now".

Those who know Tello, know he was one of the youngest musicians in Trinidad and Tobago to have his own group. When he joined Invaders (at 15 years old) as a "crack-shot" lead tenor pan player, he was already an accomplished pianist (i.e. piano player). Interestingly, he still plays the "old Invaders pan" with the large F# in the inner circle of notes. That didn't seem to bother either Monty, Jaco, or the producers of the Chicago X album. Othello Molineaux, when one looks at the timeline of events in steelband history, blazed the trail that many, including those who are mentioned today as the pioneers by many of you, now follow.

Last Sunday evening, I had a very interesting and eye-opening discussion with my friend and mentor, Mr. Othello Molineaux. He is such a humble, deeply spiritual human being. I can sense that the slight of a nation he has represented for over half a century, bothers him, but he tries very hard not to show it. As one of his "disciples", I can tell though. I thank him for our conversation, for he helped me understand why, not only himself, but my dad, and now myself, receive such scornful and slighted treatment from the very people we represent. Tello is not only wise musically, but his sense of philosophy is deeply profound. So, while others may forget you (Tello); while others may omit you from their echelon of trailblazers and personalities who took our "National Instrument" to greater heights, I, George David Goddard (aka "Pan'tum - The Ghost Who Talks"), will never forget your contributions, and look forward to many more lessons. Not just on music, but on life. As always,  my brother, Shem Em Hotep (May you always go in peace.)

BTW - Thanks you Tello, for being the ONLY steel drum/pan recording artist to mention George "Sonny" Goddard on your album, It's About Time. Keep making great music!

On When Steel Talks as, Pan'tum - The Ghost Who Talks. 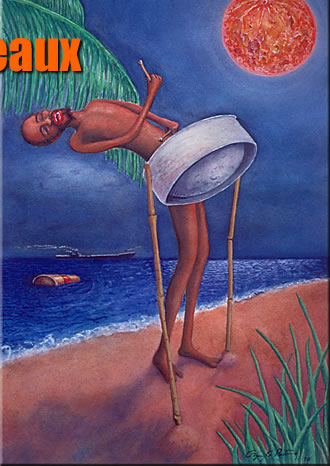 Leroy Calliste Telo will allways be no 1. (For those who don't know, Leroy Calliste, is Black "The Caribbean Man" Stalin.)

I have been lucky enough to hear Telo perform at least twice in Miami but can't seem to find his music anywhere.

It was my pleasure to have played with Orthello in Germany

with Roy Brooks. Orthello was special guest with our percussion ensemble.

We also played together on Montreau Jazz Festivals. I was switching from

vibes and played with an up swing which is a big no no. But Orthello was

smooth and did not make me feel low. Thanks Orthello for the opportunities!

I also mention him in my book Discover the Steel Drums.

written by Chaz Russell of The Gratitude Steel Band

Thanks for sharing your experiences with the legends, Chaz. Roy Brooks is one serious cat! lol. I also had the pleasure to work alongside him under Emile, back in my days in Detroit. Tello (and) Roy are on a different musical planet. I hope he reads all these postings of appreciation, but I will tell him. It is time the rest of the entire When Steel Talks community, as well as all "panmen" and "panwomen" at home in Trinidad and Tobago and abroad, to acknowledge his contributions and honor this son of our soil; the birthplace of the instrument we affectionately call: Pan. Also the birthplace of Othello, Mr. Pan Man!

Tell him to look up Calgary, Alberta, Canada on a map... a blues / jazz sax man that I've played with LOVES his music, and raved to me about it the first time I brought my pan and jammed with him.  What I mean is that he is appreciated far and wide!

I have only heard a couple of his songs, and so I am less familiar.  But I have always considered him a pioneer and influencial figure in pan.

I've only ever seen one Invaders pan before.  My fascination in Othello Molineaux just jumped!

I'm sure Emile appreciates the props. He has posted a lot of entertaining videos, but few show their appreciation for the brother. Again, thanks for your comments. Ghost.

Permalink Reply by kenneth clarke on September 18, 2013 at 3:57pm
A Maestro in the Culture.

I am deeply humbled to be mentioned on the same channel as our great teacher and master "Kiskadee the Mighty" as he jokingly calls himself.  Othello is The 'Bob Marley' of the steeldrum evolution. The Capt. Kirk of the 'Starship Enterprise'. Africa's Shaka Zulu on another Godly mission. It was his recordings with Jaco Pastorius that first put me in a 'chokehold' like so many other music loving fans worldwide. After witnessing his magical touch and influence on many occasions, I remember seeking his advice at a crucial point of my life's musical journey, I was very disappointed and angry with the world, till my trusted guide gently but firmly instructed me to change my attitude,in a sense 'lighten up' and play the hand that I was dealt. This was a surprise at the time since I blamed everyone around me for not making the same efforts,and therefore judged them harshly. Thank God I heard his words and listened, I would have had a heart attack 20 yrs ago on that pathway.. I can share moments that will transform anyone about Othello Molineaux's magical gift, but for history's sake I hope we put it in a book and then it's feature movie for the world to feast on..

When I first encountered the music of OthelloM, and later met the man, he enjoyed scanty recognition among jazz and pan people, but he did play at least once play at Queen's Hall in Port of Spain. Over the two decades(?) since, so seldom has his name come up that, knowing how time and people pass these days, I have been unnerved to ask whatever became of him. He had defined himself a "steel drummer"; he had his reasons. I decline to apply the word "scorn" to the lack of recall of OM and of George Goddard Sr. The credit lines omit this fact, but I worked (as editor) toward the publication of the George Goddard book, "Forty Years in the Steelbands", as Dr Roy D Thomas may confirm. I cherish the memory of the Othello M and George G Sr work that crossed my path, and resist any interpretation so overwrought as to equate the commonplace ignorance of others with "scorn".

Mr. Grant, thank you so much for your informative comment. We are working on having the book republished, and I will definitely ensure that your contribution is honored in the next edition. I will contact you privately, if I may. BTW - The use of the word "scorn", is all on me, and did not come from Tello. Its use was also not meant to be a sweeping indictment, and was not meant in a literal sense. Your point is taken, though, with my sincerest appreciation. I look forward to learning more from you.

Spiceman, you know the first time I met Tello was in 1985, and it was all because of yourself and your dad. (Cannot believe it's almost 30 years!) You know it's both yourself and Tello who introduced me to the "Jazz World". You both set the standard for me. You know we have MANY stories to tell. Priceless!!! Thanks for your comment. Hotep (Peace).