1st Runner up in Pan in the 21st Century 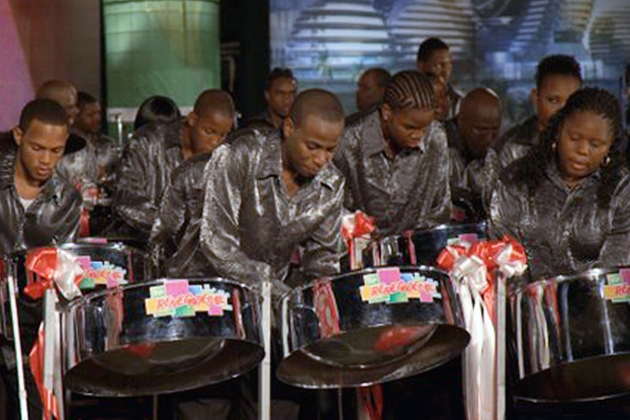 Bp Renegades, back in the finals of the bmobile Pan in the 21st Century
Competition for the first time since the retirement of Musical Director Dr. Jit
Samaroo in 2007, emerged 1st runner up (from 6th in the preliminaries)
to the eventual winner, CLICO Sforzata who had also led the field in the
preliminary round.


Held at the Jean Pierre Complex, Wrightson Road,Port of Spain on May 29, the Finals featured the top twelve
bands from the preliminary round. A breathtaking backdrop of illuminated futuristic
images, portraits of steelpan greats such as Bobby Mohammed, Ray Holmon, Liam
Teague, Bertie Marshall, Clive Bradley, and Jit Samaroo, and a huge monitor on
which the music video of the tune played by each band was shown prior to them
performing, lent magic to a wonderful evening of great entertainment.

Caribbean Airline Invaders got things underway promptly at the 8 pm scheduled start time. Bp Renegades came next and thrilled the audience with its
rendition of Celine Dion’s, “I Surrender” as arranged by Kenneth Guppy. The song
was played in the original ballad rhythm in the key of A-flat minor for the
entire first movement, before Guppy switched to a reggae beat. He then started the
bridge in the song in an African rhythm that he changed halfway through to a
Castian. The stepping of the players too, were well choreographed and served to
draw the spectators into the performance as the music switched to calypso then
back to a ballad, (this time played in the key of A minor) and then to funk. They
returned to the ballad again before climaxing with a well-executed cadenza
played by the band’s Ag Captain, Candice Andrews on the double-seconds and Cleveland
King on the double-tenor that brought the audience to its feet.

Sforzata, conducted by Dr Jeanine Remy, was the last band to take the stage, and rendered Jasmine Sullivan’s popular track, “Bust Your Windows.” At the end of the performance, a
female member of the band took a baseball bat to the windscreen of a derelict
car used as a prop, in which a man was sitting with another woman. The crowd
loved it and so too did the judges who awarded them the title and the $100.000
first prize sponsored by bmobile.

The show ended at 11.45 pm with patrons fully satisfied that they had seen and heard their money’s worth in the performances. The rules of the competition
stipulated that the
twelve orchestras take the stage with no less than thirty and no more than
fifty musicians, perform a selection from the 21st century world
beat repertoire from the year 2000 and beyond, and for not more than six
minutes. The adjudicators were Carl ‘Beaver’ Henderson, Chantal Esdelle, Sherry
Ann Saunders, and Lambert Phillip.