A MAGICAL EVENING IN A TWILIGHT: A Silhouettes Steel Orchestra/Enyal Pan Music Production

“ A MAGICAL EVENING IN A TWILIGHT”

A magical evening of Pan & Parang  music indeed was displayed on Sunday 2nd December 2012 at the Twilight Restaurant  located on  the  South east corner  of Nugget  Rd and Mc Cowan Ave in Scarborough, Toronto.  This event was created by the Silhouettes Steelband and Cultural  Community Organization and was produced by ENYAL Pan Music Productions.

The collaboration certainly worked. The success was evident according to the  performances from all the performing groups which were masterfully delivered and  readily received by  the 250-300  attendees who ate up the music like a deliciously prepared West Indian Dish constructed with  all the  tasty Caribbean   spices, ingrediances with all the intricacies. The atmosphere was  quite reminiscent  of a Caribbean Christmas Lime with family and friends celebrating the season with  good music, food, “ole talk” and dance.

The first half  of the program began with a skilful presentation by Pannist, Taurean Clarke, who delivered a jazzy repertoire  of Christmas and  popular standards which set  the tone for the events to come.

This was followed by confident performances by Silhouettes Youth  Steelband  Assembles and Chamber Programs whose  members diligently toiled for eight,  one and a half  hours’ sessions to perfect their 5 songs repertoire to present for the event.  Congratulations go out to our Level one  and two youth members who demonstrated commitment, teamwork, integrity, intelligence  and maturity to  understand the magnitude of  the task set out for them to achieve success. According to the instructor, Layne Clarke,  “they certainly surpassed expectations” and the same sentiment was echoed by several proud parents,  audience participants, as well as, the founder of the organization, Danny Mosca.

The Second  half of the program commenced with the thunderous sounds of the senior band lead by the fearless and talented arranger and  pan soloist, Mark Mosca who delivered a repertoire  of  Parang and Christmas standards;  arranged rich with  rhythmic and harmonic allure  and intrigue which captivated  the audience every step of  the way.  The superb techniques, smiles and confidence of the members  certainly assisted in embellishing  the arrangements which translated well with  expression and emotions to the audience.

The formal program concluded with the launching of a new Parang band  appropriately named,“ Los Pan-didos Amigos”  which consists of a group of talented  music professionals who came together for the soul purpose of lending their musical prowess in support of the Silhouettes Organization‘s fundraising  initiative. Needless to say  the launching was a success and the band well received . This would hardly been  possible  without the extremely talented and accomplished  lead vocalist, Alana Milne. The  backup musicians included Dennis Renwick, lead guitar, Andy Phillips, bass, Mark Mosca, keyboard, Layne Clarke, alto pan , Gareth Burgess, Drums and Elton Jones, percussion.

Thanks to the many other musicians who came out and joined the effort in support of this cause..

The Silhouettes Cultural Organization and Enyal Pan Productions would like to thank all the members of the performing groups.

Thanks Anthony for your kind words.I will surely convey your thoughts to our young pannists. I am sure it will motivate them to try even harder.

Happy Holidays to you and yours. 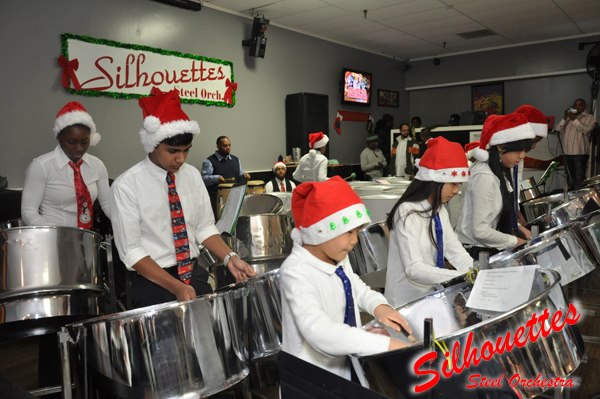 congratulations: this is great hear continued success to all especially the youth groupe, keep up the good work merry xmas and all the best in the new year.

When will DVD's be ready for sale?