A Vote For MARK STATE (6-Bass CCAH Sr. Steel Band) running for MAYOR IN TORONTO, Is A Vote For Toronto West Indian Culture 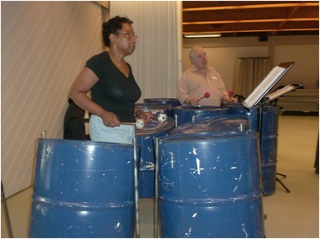 One of my personal concerns as a steel pan player in a city that honours Carnival with three major parades and more than a week of celebration and competitions --with people from all over the world attending-- is what's going on between city administrations all over North America and West Indian community Carnival organizers in terms of acknowledgement and funding. You've read the reports in the "Pan Times" and "When Steel Talks".

Clearly many US cities do not understand the value Carnival celebrations bring them. Recently, we've had problems organizing Carafiesta in Montreal. Whether they're called Panorama, Caribfest, Caribana, Carafiesta, or Carnival, the celebrations are an enormous source of wealth to any city so fortunate as to have a community active enough to organize this event. And fun? Where else can an entire city get involved in jumping up and celebration?

Toronto's difficulties with our own Caribana every August revolve mainly around funding. While every tourist venue (hotels, restaurants and night clubs, shops) benefits from the attending crowds in the downtown core where the festival is held, literally none of the extra millions of dollars in earnings gained by those businesses (except the individual vendors licenced by the city to sell knick-knacks, crafts, and West Indian foods) makes its way back to the festival treasury.

In Toronto, we have a King and Queen, Caribana, Junior Caribana, and Samba parades, and Pan Alive [our Panorama steel band play-off] along with a week of stage shows all over the city and liming together at a huge picnic on the Toronto Islands. We call it Toronto Caribana. [To paraphrase When Steel Talks, "When Toronto hosts Caribana, everybody comes out to celebrate!"]

I believe that the city should apply a special tax on tourist venues in the downtown core, with a clause that prevents them from raising their rates (any more than they have historically for large events) to cover the new tax, so that visitors don't get hit with it; and that the city set that money aside to support the mass bands and Caribana events from a city-managed fund as advised by the organizers.

(Ordinarily I would have thought that the fund should be directly administered by the Caribana organizers themselves, but in the past, there have been accounting irregularities associated with that type of arrangement. No point in leaving the city open for more hassles on this topic. This way, the festival still gets the money where it's needed.)

None of the other candidates for Mayor is a Pan man. None of them has a vested interest and part of their souls engaged in ensuring the healthy continuation of Toronto Caribana.

If you love Caribana; in fact, if you are from the West Indies and proud of this expression of your heritage in Toronto and want to see it placed somewhere it can continue to blossom and grow with the encouragement and active help of the city, please think seriously about voting for me, Mark State for Mayor this coming Monday.

In order to win the election, a candidate only needs about 100,000 votes. This is important to all of us. Please tell your friends to consider a Pan man nicknamed "Six" for Mayor, and to check out my websites to discover whether I'm really worthy of your vote as leader of this city.

In my website booklet, "The Human Factor: Social Actualization and Productivity", I propose active citizen participation across the board in Toronto life. A question that comes to mind around Caribana is, "Should we maintain the fenced-off parade route, or should onlookers have some access to jump up with the mass bands?" Let me know what you think by emailing me at vote.mark.state@cia.com.