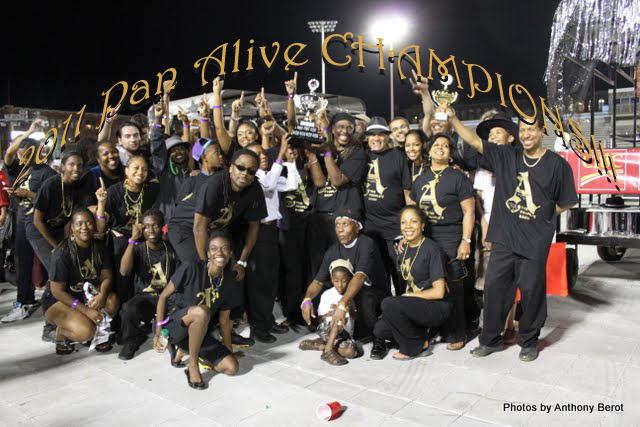 As the end of the competition drew near, Pan Alive night, the members of Afropan setup their pans and got ready for their time to shine. After their hard work and late nights, the band was hoping to take back that first place title again, as opposed to the tie for third received years prior to this.

The announcer introduced the band, acknowledged their tribute flags for their 8 "Afro Angels", that had passed earlier this year, and conductor Terrell La Pierre got in his zone. Arranger, Earl La Pierre Sr. began the count in and with those final three taps, BANG! the first note dropped and the "Raging Storm" began. The next 8 minutes were filled with high energy, raw talent and sweet musical mayhem as the sounds of steel and rhythm poured into the hearts of all lucky enough to hear! As that final note was played both the crowd and players erupted in cheers of celebration and accomplishment; they knew their performance was near flawless and if nothing else, they executed a "Raging Storm" to match no other.

It was time to hear the results and with first and second place left to be announced the tensions grew thick and time seemed to stand still. After much anticipation, first runner up is announced....SALAH, which meant AFROPAN STEELBAND had done it! They successfully reclaimed first place and their 28th competition win since 1973! Players & supporters began to run from wherever they were back to Lamport Stadium! "AFROPAN! AFROPAN! AFROPAN!" echoed through the air with utter excitement and a sense of community surrounded the band as other steelbands extended their hands in congratulations for a win well deserved! As part of their celebration, the band members sang out their rendition of "Raging storm" inside Lamport stadium before moving the party back to the panyard for their J'ouvert celebrations.

Afropan Steelband "The People's Band" would like to acknowledge arranger Earl La Pierre Sr., conductor Terrell La Pierre, their 8 "Afro Angels" whom continue to bless the band daily and all of the players and supporters; for without the dedication and contribution of everyone this win would not have been possible or half as sweet!


Find more photos like this on When Steel Talks

28 wins over 5 decades, time to step up and repeat the performance of 2011...  https://www.youtube.com/watch?v=QDT2VkNjtac

lol good point Carl, that was my bad, I should have put 28th first place title... I wasnt aware at the time I was informed of our win count that Pan alive has not been around that long and it was similar competitions before then that we had claimed first place at...

but on behalf of the band I'd like to say thanks to all for your comments and support :o) much love!

Comment by carl husbands on August 10, 2011 at 8:00pm
congrats to afropan but one thing i cannot understand and i would like to know how could afro win their 28th panalive competion  when panalive was started in 1987 i spy4pan

Congratulations  Earl Sr. you continue to inspire some of us with your humility, your talent and most of all your commitment to your family may you with God's help and guidance continue to grow and may you find inspiration to produce music that continue to lift our spirits.

Your Friend and Fellow Musician

Comment by Mercer Ramdoo on August 9, 2011 at 11:52pm
Congrats to Earl Sr. and Afropan. Sounds pretty good. Should go down to NY and compete in Panorama. Would be interesting.

Comment by Gerald Pinto on August 9, 2011 at 9:28pm
To me the best thereis in Canada without a doubt. One the the very best in North America.

Comment by Jeannine Remy on August 9, 2011 at 8:39pm
Congrats Earl LaPierre and all of Afropan!