So we now have a new Minister of Arts & Multiculturalism .Dr.Lincoln Douglas and Winston "Gypsy" Peters is now the Minister of Community Development ...what does it all mean? What is the information on Dr. Lincoln Douglas? What can we expect from these changes?

Cindy Williams, your sister (also, a friend of the family), Renee, drove hard to the basket, and dunked hard on them with this one! Highlight film! Facial!!! Shaq? I would have been more convinced if it was Zo; at least he is already involved in the community. Shaq, on the other hand, has been playing cop, since he was in the NBA. A big, rich, kid, playing "cops and robbers". Think he would have done it for "free"? Guess who foots the bill on this game of "politricks"? (HINT: Not Hang-A-Man Jack.)

GHOST - Who Knows The Racial Stereotype Linking Basketball with Blacks.

Update: Shaq visits the shacks. (What are your views?)

UPDATE: ."You is Rawan (a demon),” Randy Boodhai shouted." (To Min. Jack Warner)

Because a ghost can not only go back into the past, but can also travel to the future, I saw through this administration from day one. So, NO ONE cannot say that I did not blare the trumpet, when I saw Trinidad and Tobago about to move toward fascism. Thanks, Sinister Jack Wanna Be The Ripper, for providing further evidence. And like the band on the Titanic, panmen and panwomen are expected to "keep playing" until the boat sinks. Who knew that when Gypsy sang, "Captain, The Ship Is Sinking", that he, too, would be one of the able-bodied seamen to navigate the vessel into the iceberg? I didn't.

Jack Warner puts the "in" in security!!! Wait and see, can't say you were not warned. And, yes, panmen and panwomen, will also become victims to this narcissist and the rest of the PP (Police-state Party) government. His recent "actions" should be condemned by ALL who support "democracy"!!! (I guess SIDDS was correct; I can expect to be intercepted, tortured, or worse on my return to Trinidad, as I too, stand for democracy and the protection of my civil liberties, as provided under the Constitution of the Republic of Trinidad and Tobago. So, I will be "lawyering up", and will make the relevant American and international agencies aware of the intended actions that he claims are planned against me. Come on, make me a martyr, Mr. National (In)Security Minister, and quit confusing fame with being infamous. You are creating quite a "legacy" for yourself, but not one that I would recommend.

GHOST - Who Talks Like ANY Other Prophet. With VISION!!! (Time for most of you to stop being so myopic.)

Also, please keep in mind, that, historically, the police have never been friendly to the panman or panwoman, even when all they were guilty of, is playing their instruments - our "national instrument". My dad and Uncle Julien, in 1970, both still had to openly protest against colonial laws on "the books", that considered pans as "noisy instruments..."; laws, that the police force were enacting and invoking. So, please do not get it twisted; the police force, has to date, not shown itself to be an ally of the pan members of the "steelband movement", and, are there to "protect and serve", not the masses of pan players, but the elite and snobbish of Trinidad & Tobago society, who for the most part, could not care less about anything to do with pan, or the people involved in it. Am I wrong?

The police will have nothing to fear, but the population will be manipulated into giving up their civil liberties, out of FEAR. This tactic was used by Adolph Hitler and George W. Bush (Dick Cheney, really), and is now being used by the PP government. This is why, regardless of the facts of the lack of effectiveness of capital punishment, or the evidence brought out in the Scott Drug Report, the new "Overseer" on the "Plantation", supports both hanging and the return of the Flying Squad. Absolutely reckless, and we are witnessing the beginning of a very "dark" period in Trinidad & Tobago history. Of course - Jack (does) understand the media; again, both Hitler and the Bush Administration, also understood the influence of the media, in promoting the agenda known as - NATIONAL SECURITY! This PP Administration's campaign may have appeared to be "Obama-like", but make NO mistake, Prime Minister Kamla Persad-Bissesar is more Sarah Palin than Barack Obama. May the "God" in us, help in blessing our nation, for the shift to fascism and totalitarianism is evident, according to their definitions. So, Commissioner Gibbs plays the role of Heinrich Himmler, and, Jack Warner, as the greasy, Black Rudolph Hess, who really wants to plat the role of Adolph Hitler, himself!!! Flying Squad? That's the answer to the crime problem? We'll see...

GHOST - Who Understands The Role Of The Media. And It's POWER!!!

The Pan Podium article linked by When Steel Talks is a press release from Northern Illinois University which indicates that Dr. Douglas got his doctorate there, in Adult Education.  NIU is the home of the pan program started by Cliff Alexis and now carried forward by Liam Teague.  We can hope that Dr. Douglas is sympathetic to the needs of the pan community from his connections there.  Other information on Dr. Douglas is available on the Internet by googling his name. 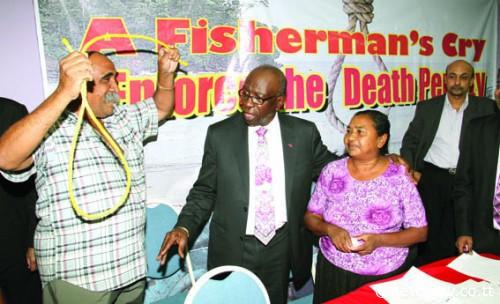 What to expect? There's a new overseer on the plantation. Let the lynching of "kneegars" begin!!! (One size fits all.)

Hey, as long as we know what we're asking for, because we're certainly going to get it from this current government, which I think is both irresponsible and reckless: