Richard passed away and was cremated on November 5th, just a couple of weeks ago. Apart from his active involvement in the management of Renegades, Richard worked as a contractor for the Steelpan Initiatives Project and was the lead engineer for the G-Pans and the steelpan fabrication facility at Macoya. He was a member of the team that was awarded the Chaconia Gold Medal in 2008. He was a brilliant man!

The first picture posted below is one of just a few I have in my possession and shows myself, Richard (centre) and master tuner Roland Harrigin at Roland's tuning room in Belmont in December 2008.

Richard is the second member of the G-Pan team to have passed away - Keith Belle passed on last year. Keith was a keen metallurgist and an avid parandero.

The second picture shows Terry Crichlow (slightly hidden on the left), Richard at centre and Keith working on a G-Pan top with a jig they jointly fashioned in 2007. They all were members of the CARIRI steelpan research team of the early 1980s, a team that included Bertie Marshall, Anthony WIlliams, Keith Maynard and others.

Sadly their hopes of seeing the G-Pan to greater success never materialized.

May God bless their souls 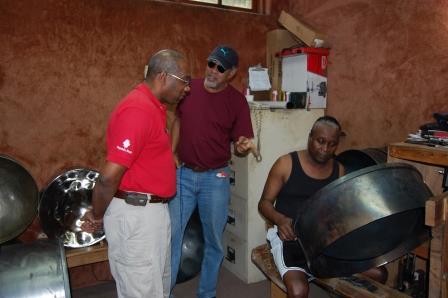 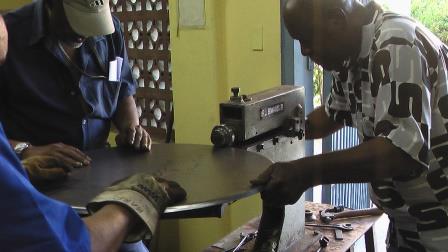 While I am aware of Richard Mc David's passing, I am expressly shocked to learn of my classmate,Keith Belle. Yes, we studied Applied Mathematics together at Government Sixth Form( Polytechnic Institute), Ethel Street, St James. The team of Richard Mc David and Keith Belle in this field of Science is indeed a great loss to the steelpan. These guys had a passion in their field of engagements and could have responded and delivered to any innovations in their world of science. Condolences to their bereaved families and I am certain that the steel pan engineers still mourn these two(2) great souls who have gone to the great beyond. May they rest in peace.

Comment by Brian Copeland on November 22, 2013 at 10:39am
Thanks Keith ... always thought there was just one trip. This information should go to NIHERST where the last of the pressed pans are.

Actually I was the person that went to Birmingham to take a pan to an old die maker, shipped the mould to Gothenberg, travelled to Gothenberg to Asea Brown Boveri (ABB) (owners of the Quintus Fluid Form Press). I met with engineers there, we had specified the material we planned to use for blanks and I spent about 3 days in Gothenberg (yea home of the first printing press). I spent the evenings studying Beethoven's First Symphony at the local library since I was conducting Birdsong in Music Festival that year as well. ABB then shipped our samples back to us and we distributed a few to tuners willing to work with it. I remember Leon Thomas (Sean's deceased father who was heading Moods at the time tuned one). Richard made a second trip with Bertie Marshall, I'm not sure how that worked out, but the stainless steel sample is definitely one from the batch I had done in about 1982. I wasn't around for the Saab episode, not sure how they would have accomplished pressing without a mould though.

Peter, I have always felt that it is my mission in life to walk the path that I have walked. The passing of my colleagues just makes that commitment stronger. I will try my best to ensure that their efforts are not wasted.

As this is a tribute to them I decided to post another image .. this is two of the tops that were pressed at the Saab plant in the 1980's under the project spearheaded by Richard. These samples are the property of NIHERST. Richard explained to me that the molds were made of wood and that they managed to get the folks at Saab to stop production for an afternoon to press out a few samples. Some made it to CARIRI and were mounted and tested.

The one on the left is stainless steel. The other is brass, I believe. The picture was taken in the Steelpan Development Laboratory at UWI circa 2003. we had the chance to examine the brass pan whilst studying under Mr McDavid am in the US now but will check it out, it is sad how projects are running into trouble in the place where it can best move forward, I cried when I saw one of Tony's Williams big pan under a fowl coob  near Sangre Grande, then saw it in a Grande steelband, with fowl dung still attached to it, hmmmm, let me shut up now, keep up the works guys, Peter please accept my condolences, all the things your father taught us I have heard metallurgists out here say the same things bout metal behavior, he had a passion, and I take his teaching for life

This blog brought tears to my eyes. My father lived and breathe the steelpan. I only hope that the Steelpan Initiatives Project continues and fulfills it's true potential. It's the only way to truly honour the memory of my father and Keith Belle, who are but a handful of a dedicated bunch.

We have one stainless steel top that was sunken (down to the grooves)  in Richard's trip to Switzerland in the 1980s. That top had disappeared from the shipment to Trinidad and resurfaced about 5 years ago. We have a brass unit as well but that was constructed by Clem Imbert and his student. You are welcome anytime to view it.

1982! All of this simply goes to show how third world we are.

@Sweet Eustace when you're ready, you can contact Prof. Copeland. I believe there may be some of them floating around the lab. I am not sure whether CARIRI still has any in their possession. This was done circa 1982/3. Painful!!!!

", he along with picherry and others worked tirelessly at developing the pan, till this day no one took up his suggestion to buy the better material to build the pans" (Sweet Eustace)

.... The G-Pans and the current range of drums (regular sized) that Richard helped design all use tops made of "the better material." For them the Steelpan Initiatives Project was a second chance to make a meaningful contribution to the movement. They got to make and deploy the pans they wanted  - the final process of marketing etc. is yet to be

Thanks Keith Maynard, mih blood still boiling as you talk about the pressing experiment, is it possible for me to work on one of those brass pans, the fella out here who hijacked the idea, gave me some of the Stainless, steel I actually was crazy enough to actually build one by hand it was hard hard work, but it tuned, one of Harvey's Stainless was stolen from me I know it takes a hell of patience to tune them and fine tune them and I found out it needs some thinking outside the box to tune and fine tune, I think I am ready to try the brass now, I got some baggage to get rid of before I come forward