How can one contemplate genius? How does one recognise that savant quality in gifted musicians? Here in the “Third World” of foreigners' fantasies, the reputations of communities have been placed on the shoulders of political giants, on the shoulders of criminals, on the shoulders of cricket captains and steelpan arrangers. For this Carnival 2015, I ventured to gather that magic of the urban panyard as a locus for creativity, for communality, for a congregation of the curious at the periphery looking in.

Travel writers have marvelled or maligned the steelband in print going back more than half a century. Patrick Leigh Fermor writing in The Traveller's Tree after a visit to All Stars panyard in the late 1940s noted, “[t]he sound that burst on the ears was hallucinating. From a mile away it might be almost agreeable.” "Almost" is not nearly good enough. Adjectives like “agreeable” are curt not ebullient. VS Naipaul a decade later in The Middle Passage reminisced infamously, “the steel band used to be regarded as a high manifestation of West Indian Culture, and it was a sound I detested.” A writer before his time or just a fastidious paladin in the service of the colonial ideal? These were still the early days for the phenomenon of the steelband.

In 1955, another “outsider,” Dane Chandos in his travel book The Trade Wind Islands wrote after his experience in a Woodbrook panyard that, “steel-bands-men...only at night turn to the serious business of living, pooling their thoughts, their humor, their ambitions and aspirations, with those of the other members of the gang.” The gang! When tropical urban youth gather it is described as a gang. History notes the violence of those gangs. Pan battles were rife. In Trinidad, however, out of chaos comes beauty.

The steelband, the community of players, now mostly female, the musicians on a mission are wilful participants in a kind of transformation of sound. The pans have evolved sonically over the years by those revered tuners—those iconic men of steel, Bertie, Butch, Wire, Tony, Ellie—into, among other things, engineering novelties like the awarded and gradually accepted G-Pan family. As Kim Johnson said so poetically, “the audacity of the creole imagination,” generations ago, birthed a movement. A movement of music, of genius, of people.

The steelband and the arranger. A unity. The last bastion of original Western orchestral music? Let's see. Travelling east to hear Birdsong just before the Panorama Semis, aware that steelpan iconoclast Andy Narell hasn't enthralled Trini pan cognoscenti as an arranger and composer, I discerned musical indifference from afar for what on close inspection was music that followed its own path parallel to the ingrained Panorama jam. Was it too soon, or was it a response to chauvinism gone awry with catcalls for his deportation because of arrogance? Westward ho, and one encounters panyard communities passionate with the fervour of zealots. Exodus, All Stars, Renegades, Despers, Silver Stars; Pelham, “Smooth,” Duvone, “Robbie,” Liam all enriched the well of orchestral music from this island. Tunapuna, Hell Yard, Charford Court, The Hill (come down), Newtown; communities enthralled. For this writer, however, that visceral feeling that one knows when something is working was left to the one and only.

Len “Boogsie” Sharpe, that avatar of all that's right and wrong in our music industry—brilliant prolific creativity and an errant lack of control to time and order—is Trinidad and Tobago's mad genius. In music, we have given regard to that definition to Mozart, to Charlie Parker, to Stevie Wonder. Men, sadly only men, who have made 90-degree turns in the music and enriched us. In the liner notes for his CD, “A Tribute To the Mighty Sparrow: Len 'Boogsie' Sharpe on the PHI,” I wrote:

Len “Boogsie” Sharpe has reached a point in his career where accolades are superficial. He is that temperamental genius who can compose in his head without the enhanced skill of an academy-trained musician, the scores for up to eight mini-symphonies for large steelpan orchestras in one short Carnival season. In Trinidad and Tobago, the Caribbean diaspora and the world, “Boogsie” is an icon of steelpan, that self-sufficient and brilliant musician who can do it all. In that sometimes erratic mind of his, “Boogsie” can cajole melodies and improvisations from any steelpan family member, making the familiar new, and the new, unforgettable.

Boogsie from Kim Johnson on Vimeo.

One is witness to that erratic mind. At 2:00 a.m., a couple days before the Panorama Finals, the seemingly random staccato of music notes being shouted out, in fact is the genesis of a new melody. "Boogsie" is creating on the fly, in situ. He is not improvising, he is "extempo-ing." In the film Pan! Our Musical Odyssey, "Boogsie" proclaims:

What madness is that? The comparison to Mozart, Charlie Parker, Stevie Wonder is, however, apropos.

Through this madness, one has to listen. The song is never complete with "Boogsie". There is always the possibility of revision. His musicians know it. The fans know it. They expect it. This is music for the occasion defined by the occasion. Panorama is not your mother's cup of tea! With a track record that suggests that the judges must like him—enough wins, top five placings, and original music to start an industry—he steadfastly persists in coining the new future sonic clichés, fashioning the new musical trope. "Rough it up, rough it up," is a phrase often heard from “Boogsie” to make the players excite the sound. "Panorama is not your mother's cup of tea!" The shock of the new also attracts a new cadre of pannists. 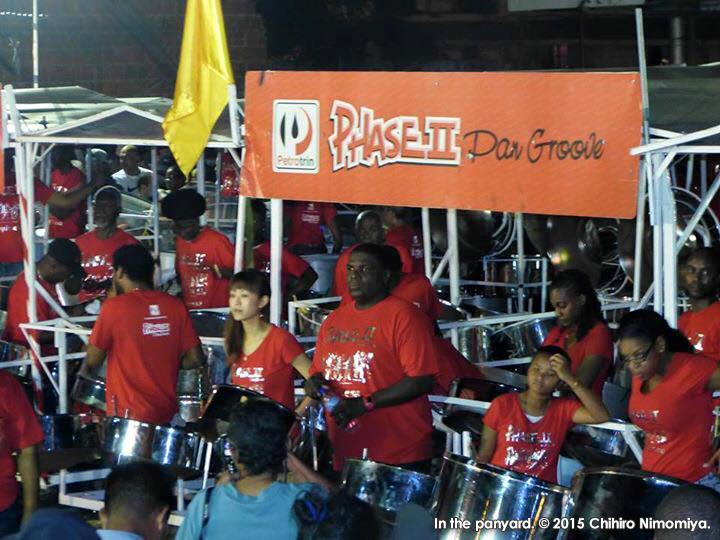 Phase II Pan Groove, like all young offshoots, made a trajectory that deviated from the norm back at its genesis, and attracted a whole lot of folk who would not have entered a panyard with the experience of witnessing either madness or genius. The fortunate traveller Chihiro Nimomiya, little Aria Bartholomew, Gary Padmore, Natasha Joseph, Johann Chuckaree. Front-liners. The immediate faces of the band. In them, we see that Phase II is a conglomeration, a United Nations gathering. Varying nationalities, races, ages, sizes all come to do service in the house of "Boogsie". The combination of player and instrument is a magnet for a divergent spectator class that includes every shade of armchair critic, newly landed fanatics who crave the next tropical hangout as advised by social media, dancing fools and the local hypocrites who are, as Earth, Wind & Fire sang, “saying nothing, talking loud.”

To suggest that pan music and the audience's sudden appreciation of it are the faddishness of the plantation nouveaux riches is to conjecture that the pendulum of taste is static. Trinidad, unfortunately, lingers with the cyclical stasis of a short Carnival season creating a short appreciation season. According to the local press at the time, the first steelband on the road was celebratory outside the Carnival. We sometimes hold dear to old totems fanning away the flames of change. Pan is global. Pan music is not cyclical. That “audacity of the creole imagination” is now visceral. In the hands of these music men, it is genius personified.

I'm not sure if its a good thing , Bernard.

It simply tells me that young men do not want to sacrifice an entire carnival season to learn one tune that may or may not even get them to the big stage on finals night.

As much as I love pan , I often wonder  if as a young man I would want to make the sacrifices  demanded by a panorama steelband of this era.

Correction the competition has NOT grown expotentially.

Although I agree with you generally, both the arrangers and the panorama competition are no longer absolute genius. Simply because of the use of mostly local judges and insufficient use of international musicians as judges, there maybe too much bias for one arranger to the next and from one band to the next each year. The competition has grown exponentially both from a musical point of view and from an international point of view. Unlike the Soca Monarch competition which has grown in many ways including the visits by international music stars. Arrangers of panorama bands need extra judging by international musicians. I have said this many times and many years. We need to invite international musicians like Hebbie Hancock, Quincy Jones to sit as judges as well. In this way we could arrive at a more honest opinion in an arrangers musical genius and the genius of the panorama band sound as well. Put in another way. panorama needs internationalizing. There should be winning steel bands from other countries and other arrangers quite apart from only Andy Narell to also take part in T&T Panorama competition of genius against genius. hen and only then can we get the best opinion. Otherwise it s merely a political battle. There is not much genius in that kind of yearly battle.