Somebody shout "They Kill Bou-Cou-Meh, Oh God He Dead! He Dead!"

The warfare between two rival gangs Tokyo from Marabunta territory and Desperadoes was not anticipated to culminate in murder, but it did, after months of rioting for turf and prestige with the occasional buss-head and cutlass slashes, in this instance, in this clash, a dagger made from the fabled Stingray poisonous bone, found a home in the heart of Bou-Cou-Meh. He lay there on the pavement bleeding out as gangsters on both sides scampered from the scene, the sight of impending death frightened even the "Dreadest" among them, but not Kid Coolie, he stood his ground as the nemesis retreated, he waited and witnessed his friend's demise.

Fitzroy Pierre and I were playmates and neighbors on Clifton Hill, East Dry River long before he ever had designs of being a "Bad John" with the earned reputation and adorned nickname "Kid Coolie," in this place in time when to be called a "Coolie" was a derogatory term he wore the sobriquet as a badge of honor, the endowment of an untouchable stigma in gangland was in itself a status symbol. His being feared in the gang warfare circles as a long-handled-razor-toting-slasher was his claim to fame.

We were childhood buddies in our Kite-Flying and Marble-Pitching years, although from contrasting parental upbringing; my parents were strict disciplinarians, I had to go to school, there was no questioning that; Fitzroy on the other hand lived with his sick mother bedridden and dying of cancer, no father in the home and a wayward Auntie who wasn't concerned as to whether Fitzroy went to school or not, so with no parental guidance he was reckless, but he was my friend.

Fitzroy was a "Dougla," the term used to identify a person of mixed parentage of African and East Indian descent, the Indian of course was his absent father; in this time in our budding existence such a union was as strange as dog and cat in the same house. In those early years it was a rarity to see Blacks and Indians in a romantic interlude, so I never saw Fitzroy's father and I would assume neither did he. Eventually his mother Hilda succumbed to her illness and passed on, and Fitzroy moved out of the neighborhood. I heard through the grapevine that he now lived down by the La Basse in Marabunta territory which was beyond my exploratory perimeters, but his reputation traveled far and wide, and I heard he was one of the main players in the rivalry between Tokyo and Desperadoes, they said he rode "Shotgun" to Bou-Cou-Meh. I did not bless my eyes on my friend since he relocated, until "The Burial."

There was a "WOW" factored over our city with Bou-Cou-Meh's death, everywhere there was gossip, and rumors about "Who Dunnit."  While funeral arrangements were being made the air was tense with anticipation, would there be repercussions?  One wondered. But the gang warfare however subsided to a distant whisper, maybe the dawning on the Warmongers of the new reality that in warfare death is possible. Gang clashes in our city was somewhat traditional then, particularly around the Carnival Season when the women in our midst would vie for attention and entice rivalry among their menfolk, but Murder!  Was never in the cards, Never....

Today is the funeral of Bou-Cou-Meh and as the procession gathered there is a drizzle of rain,  but the sun is shining and there is a rainbow in the sky. An elderly gentleman whispered with pensive revelation "Rain Falling, Sun Shining, the Devil And He Wife Fighting For Bou-Cou-Meh;" as the procession began its march from Marabunta territory through the city attracting sympathizers, followers and onlookers on its way to Lapeyrouse Cemetery. There is an aura of celebration in the air which contradicts the anticipated sadness, as the crowd thickens an onlooker shouts as the Funeral Hearse wends its way down the avenue, "Rest In Peace Bou-Cou-Meh" and there was jubilation in and out as an electric frenzy seemed to spark the procession, as it entered the Cemetery grounds.

The six foot dugout soil removed from the gravesite where the deceased remains would be buried was wet and muddy as Pallbearers stumbled to maintain balance, slipping, sliding and falling but maintaining the posture of the coffin cradling their soldier Bou-Cou-Meh.

I heard a voice I recognized, it spoke with authority directing the proceedings, I turned around and there was my old friend Fitzroy a.k.a. Kid Coolie, I waved my hand gesturing for recognition but he looked right through or past me, and I thought maybe it was his preoccupation with the excitement of the occasion, or maybe unlike me the memory we shared had no lasting significance to him compared to what he had been through and had become.

There were Bad Johns from all districts from around town at the burial, but it was somber, there were weepers and wailers throwing sacrificial offerings into the grave, and the elderly gentleman rang a big brass bell while some older women chanted in a strange tongue, one particular woman seemed more distraught than the others and she was being supported by other females and then unexpectedly she dislodged herself from their grip and made a dash for the grave in an attempt to throw herself in, crying uncontrollably as she did, but she was blocked by the Pallbearers and retained and then somebody said "Band She Belly and Let She Wail, Let She Grieve," and did she wail as a wolf howling in the wilderness she moaned and moaned; as Bou-Cou-Meh's coffin was lowered into his grave, and now the Pallbearers, the women and the children their black and white funeral attire all lathered with mud now jumping and stomping a frenzied dance on the newly refilled grave of Bou-Cou-Meh, until the earth was flat again, until they had their fill. They had sent their fallen warrior home to rest. The burial was over.

The crowd of onlookers started to disperse onto the streets thinking that all the excitement was over, but there was a Chant I was hearing in the distance and as I got closer the voices grew louder and it was accompanied by feet stomping and I was now close enough to recognize what the Chant was saying, it was :-

We are the Bad Johns from Tokyo"

As profane and defiant as the lyrics were, equally as sacred but tribal was the Tambu Bambu rhythm that accompanied it, and that spirit embraced the funeral participants in a solidarity that you wanted to be invited into, to relish the ecstasy of the pain and yet the glory of the burial of Bou-Cou-Meh.

As the Chant continued up the avenue they were dancing in the streets and the onlookers standing on the pavement tapping their feet to the beat wishing they could throw caution to the wind and shelve their proclaimed righteousness and their hypocritical decency and be a part of this frenzy that accompanied the soul of this dome of consciousness we were encased in through this celebration of the Life and Death of Bou-Cou-Meh.

Now in the distance the Chant barely audible but the spirit lingers here as it is being whispered under the breath of the onlookers as we wend our way home.

We are the Bad Johns from Tokyo"

This story has profound perspectives some of which show the connectivity of the past and present. Love it! 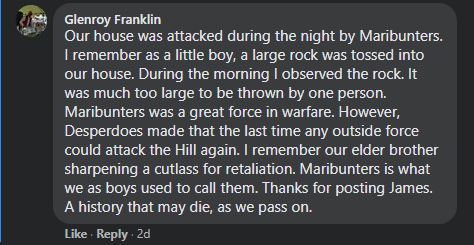 Thanks Char for you response to my story, I do agree that these colorful and sometimes grotesque happenings has a romantic flavor so reminiscent of where we were in times past.

Unbelievable story !!! So well told.  Part of our history. These stories should be put in a book for our people to know our history - good & bad.  This gives us identity.  I loved it.  My father used to tell us of the Steelband gang wars ...of Invaders and the legend of their enforcer - Boysie Singh.  ( we were from Woodbrook) ...now this from Marabunta territory!!  Amazing story!! Thank you.