What are the core-values of the pan fraternity in the 21st century? What are the ethical requirements?

What are the core-values of the pan fraternity in the 21st century?

What are the ethical requirements?

Core refers to the three-five or six MAIN/key qualities from which the fraternity evolves, while Values are standards, and ethics speak rights and wrongs, acceptable and unacceptable, appropriate and inappropriate...

While recognizing the journey of this unique invention -- from whence it came to how it gained a marginal degree of recognition -- a major part of the 20th century was challenged/hindered presumably marred by the who, what, why, and evidently the where. Many would draw reference to mindset, behavior, personal hygiene, appearance (of many), lack of proper managerial, leadership and business skills, lack of proper vision, treatment of/lack of consideration for the instrument due to high levels of ignorance, criminal/corrupted doings, and so many other ills...its stigma so strong that cripples the easy moving-forward process.

The 'how' was the mesmerizing aspect, that if remained the biggest "secret" like that of the recipe for the Angostura Bitters (Trinidad & Tobago), the 1M-populated twin-isle may have reaped mountainous benefits that it still clamors for.

Seeing that the 'magic' has slipped out of our hands, what other aspects of 'pan' can we draw upon to maximize strength?

Everyone, and I literally mean, everyone, today, plays pan!

As the veil of scorn fades, the prominent ones or those that frowned have eventually realize that pan is an instrument, and a most significant one at that. People gravitate to quality, popularity, healthy uniqueness, worldliness...stardom, hence the reason why anywhere in the world the instrument is experienced, its players are celebrated, looked-up to.

Then, what could the problem be?

Thank you Sandra. Keep writing sister. We are reading with interest and I must say that the focus on core-values has the potential to transform the membership, readership and leadership in the pan world. As you have rightly said, "Taking into account the ethical aspect of the business/ artform ..we should be looking at the rights and wrongs of what and how we do things," and raising the literacy/ advocacy level would bring about the changes we dream about.

Regarding, "The bottom line is: the equation to propel the pan-business forward should be 'Pan=$ + elevation of life.'" has to become the action that drives economic change, and this change is from the grassroots level up. It may be that the pan world has been waiting for you or me to act, and this may well be the moment. 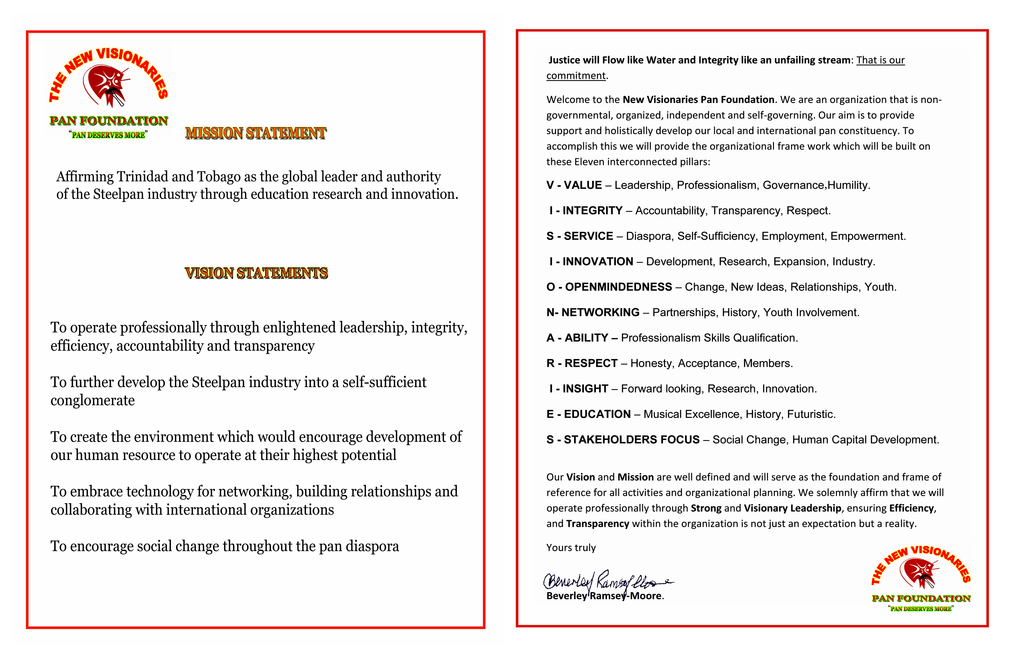 Response taken in good stride. I see your mom was like my parents, and congratulations on your steel pan-development endeavor -- "Environmental Sustainability...."

The thing is, Core Values speaks standards of operations hence the reason why I say, I totally comprehend the angle of your response.

As such, the values to which you indirectly refer could be productivity, uniqueness and creativity. We just have to throw in respect, professionalism, integrity, customer service and effective communication, and as time evolves, the values will require altering if necessary.

I feel proud that our level or adeptness, however, in converting the raw material into a splendid and refined item that continuously set the world on a spiritual fire (excitement) seems to be maintaining upward mobility. It is with that in mind, in wanting to harness the highest level of respect/recognition, financial independence and sustainability through the artform , the pan connoisseurs (policy-makers), the music makers (standard-bearers...young and old), and anyone claiming to be aligning self with this awe-inspiring artfrom, should project the most exemplary standards...protecting such.

Taking into account the ethical aspect of the business/artform...we should be looking at the rights and wrongs of what and how we do things, etc

The bottom line is: the equation to propel the pan-business forward should be 'Pan=$ + elevation of life.'

Thanks for your thoughtfulness in presenting this article. At this time I would like to make a brief comment on one of the core-values of the pan fraternity in the 21st century. We have shown the world how to reuse/  repurpose the original oil drum, we are considered global front-runners in recycling, and experts for conceptualizing these instruments. This is a great core-value that the world has recognized and I believe pan people need to reap the benefits that we have brought to the petroleum producing world (reusing the oil drum) by devising an international standard in environmental sustainability.  What this means is that we should also be writing the manual on how to implement real-world environmental solutions for others to follow. It is akin to cultivating crops. When your reap the sugar cane, cassava or whatever crops, then you are required to plant again for the next harvest or next generation. This is a core-value I received from my parents while growing up in Trinidad.

PS: I am preparing to be a global leader in Environmental Sustainability for the Steelpan community.

Comment by MC Joseph on April 28, 2014 at 7:05pm
Hi Sandra,
I took a quick read and will comment later. These are the types of discussions that prompts committed mambers into right actions for pan.

I'll be back online soon.

"Barbara..." we are indeed sleeping, but I truly hope we do not become comatose. The history of pan is always at the foreground of my awareness hence the reason for "who, what, when, and where," intended to cover the actual evolution. I believe the world is fearful of 'black', and 'black is fearful' of black not realizing that BLACK is a formal color. Anything lighter is colorless!

As (TnT) calypsonian Leroy Calliste "Black Stalin" says in one of his calypsoes, "poverty is hell," and so, many are still reflective of and reeling under bringing themselves in alignment with the poverty-stricken African/black-skin, tough-hair people -- the slaves -- that drummed, danced; were deprived, etc. We seem devoid of how to draw from the lowest ebb and create the highest peak of greatness.

To get pass that psyche needs an extremely strong, positive and confident mind. As the blog asked, "what are the core-values in the 21st century?" "What are the ethical requirements?"   Setting higher standards can be a conduit to elevating thinking, building esteem, widening parameters, and projecting the brand that attracts wealth. Leading personal, professional and cultural lives of integrity is a must!

Many people unfailingly live in the past thus will stay there yet want to be recognized in the present and considered for the future. We must be brave; we must be right; we must hold our heads up high, shoulders back and chest out; strut with dignity and bring pan to that standard, ultimately steering the artform and its artists (those designing the goals, drawing the progress map and coloring the policies) and artistes (the performers) on the stage of exemplary productive success.

Sandra, you pose 2 very thoughtful and important questions. In addressing pan issues, I find the historical compass reliable.  It is essential to remember that in 1914 the African drum was banned by colonial power in Trinidad & Tobago.  Why is this significant?  Because the practice of ones culture gives meaning to life.  So there was no drum to accompany African descendants in singing, dancing and stick fighting.  Next, the rhythmic replacement, tamboo bamboo, was also banned.  Years later, rhythm was found in biscuit tins, dustbin covers, pitch oil cans, etc , then came the steelpan.  The history of African descendants and African culture in Trinidad & Tobago is one of oppression and struggle.  Today, many deny, have no knowledge of and even disregard the price paid and contributions by ancestors to bring us to where we are presently.  Our mindset is that others are better and what we invented is not good enough to invest the time, skills set, money in planning for the future of the steelpan art form and industry.  Until we know ourselves, love ourselves, respect ourselves and each other, take pride in and embrace our history and culture,we will continue to fool ourselves. Like much of African history, Trinidad & Tobago's contribution as inventors of the steelpan can be minimized or completely written out of the history books in a decade or two, if we continue to sleep.