Mr. Dennis "Tash" Ash is a double second panist in Desperadoes Steel Orchestra since 1961.  He is one of the five who played on all 10 of Desperadoes Panorama victories.  From 1963 to 2014, Dennis played at 50 of the 52 Panorama Preliminaries and 45 of the 51 Finals.  For the older panmen, do you all remember when Desperadoes won the 1965 Prime Minister's Trophy performing the most difficult classical piece at that time, "The Marriage of Figaro?" Those double second men amazed the Queen's Hall audience.

HAPPY BIRTHDAY TO YOU MY BROTHER GUN TASH I WILL ALWAYS REMEMBER IT WAS YOU AND ELIAS THAT TOLD RUDOLPH ABOUT ME BEING ONE OF THE YOUNG PLAYERS IN THE BAND THAT HE COULD PUT ON THE COMMITTEE, THAT WAS 1978,I'VE ALWAYS THANK YOU AND PEEGE FOR GUIDING ME THRU DOES YEARS AS THE SECRETARY TREASURER A POSITION THAT I WASN'T ELECTED FOR BUT WAS   APPOINTED BY YOU, MAY THE CHIEF MUSICIAN KEEP ON  BLESSING YOU.LOVE YOU ALWAYS SENSI!!

Birthday Greetings to you, Stay STRONG,    ....just an observation  IAN,note the spelling on his PANS, when was the   " E"   added?  .... I  SUGGEST  THAT A PHOTOGRAPH BE TAKEN OF THE PANNIST  FROM THAT ERA WHO ARE CURRENTLY STILL PERFORMING WITH THE BAND  AND AN AWARD BE GIVEN TO THEM.

LAST NIGHT I SAW  MS, URSULA TUDOR, WHO WOULD BE IN THAT GROUP, STILL GIVING STERLING SERVICE. GO GIRL.

That photo was taken circa 1963, and that is an original 34-note double second. By 1966, tuner James "Bassman" Jackman had replaced all the seconds.  He elminated the lowest E and F and made the skirts 4 inches longer. 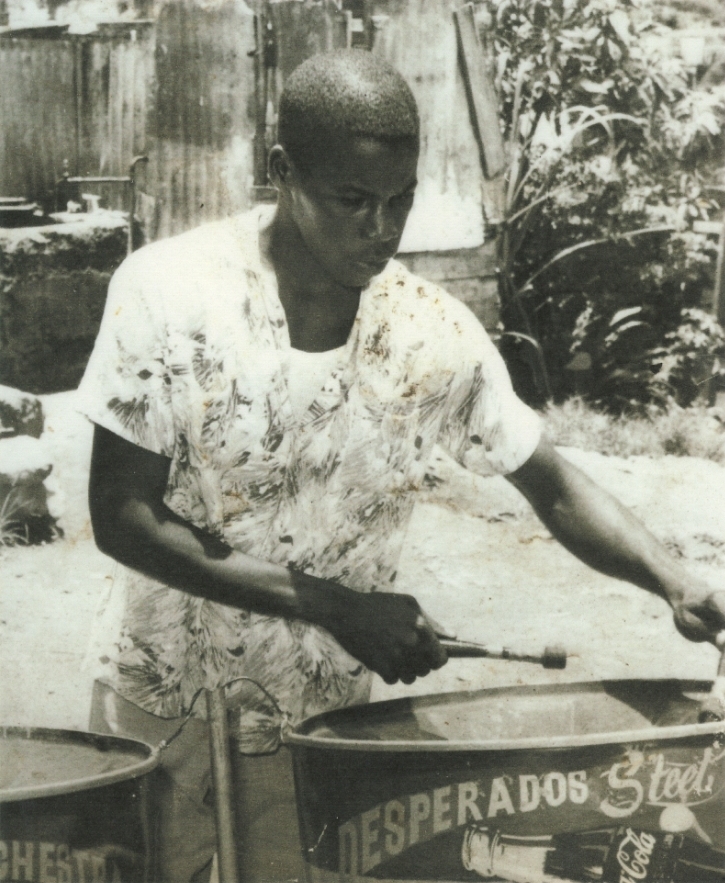 ''Happy and Blessed Birthday to Dennis Ash 'aka ''Tash''  May Almighty God Continue to Richly Bless You with Continued Long Life - Good Health and Prosperity, One of the Great Double Second Players ever. A Desperadoes Icon. Give Thanks!